Sea Shepherd Launches Next Phase of the Ultimate Death Scene 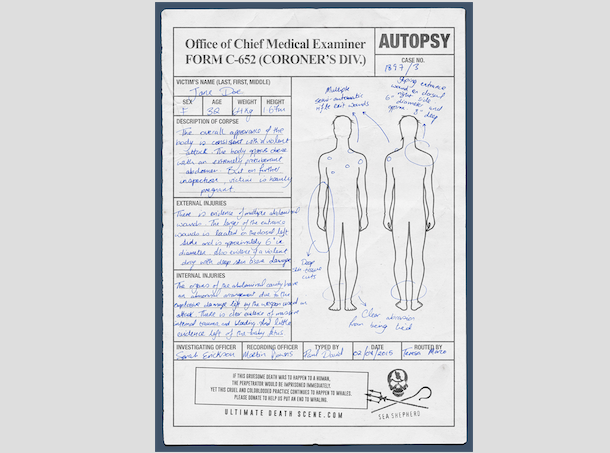 A print campaign that uses an autopsy report to illustrate the horrific injuries inflicted on a human who has been hunted and killed by whalers has been launched be Sea Shepherd in the latest phase of the ‘Ultimate Death Scene’ campaign.

In a follow up to the graphic video featuring Australian actor David Field, the print ads and a 90 second radio spot created by Sydney independent agency The Works, again highlights the barbaric way whales are hunted to the point of exhaustion and then slaughtered with exploding harpoons before being dragged violently on board a ship and shot some more times.

The video has so far been viewed more than three million times across the world on Sea Shepherd’s Facebook and YouTube channels.

The two print ads are coroner’s autopsy reports, featuring a John Doe and heavily pregnant Jane Doe, with wounds drawn on the human body and accompanying description of the injuries that caused the death – the same as those inflicted on whales.

At the end of the ad it reads: “If this gruesome death was to happen to a human, the perpetrator would be imprisoned immediately. Yet this cruel and coldblooded practice continues to happen to whales. Please donate to helps us put an end to whaling.”

In the radio spot, which was made in conjunction with Southern Cross Austereo and will air on its Triple M and Hit stations around the country, Field once again chillingly reprises his role as a human that is murdered in the Ultimate Death Scene.

Paul Swann, creative partner at The Works said: “The response to the initial video has been phenomenal. In the print work we are once again trying to bring this cruel practice closer to home and the coroner’s report is an effective means to that end. In the radio spot David Field once again delivers a brutally realistic interpretation of the video and at 90 seconds it really cuts through when listening to radio.”

More than 25,000 whales have been killed under the guise of scientific research and commercial purposes by Iceland, Norway and Japan since the International Whaling Commission (IWC) enacted a moratorium on all commercial whaling. The IWC does not have the capacity to enforce the moratorium. Sea Shepherd, guided by the United Nations World Charter for Nature, is the only organisation whose mission is to enforce these international conservation regulations on the high seas. 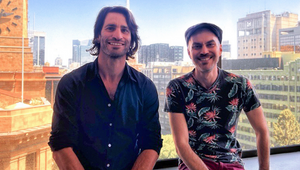 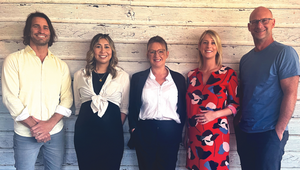 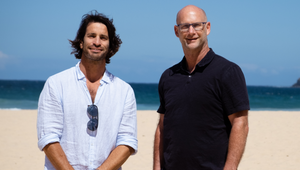 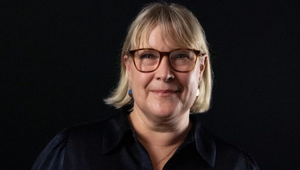