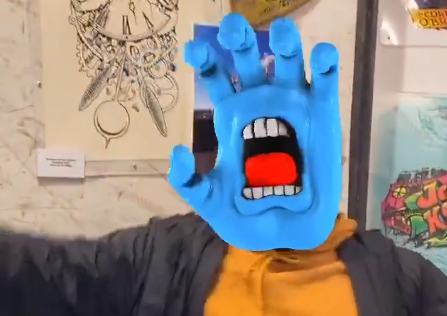 In its first work for client Santa Cruz Skateboards, R&R Partners has created an AR effect for Instagram that lets people use their facial features to manipulate the brand’s iconic Screaming Hand insignia. The design was created for the classic skate brand by artist Jim Phillips in 1985.

The effect uses a person’s eyes, brows and mouth movements to activate the movement of the Screaming Hand’s mouth and fingers. It can be twice as fun when users share the experience with their friends since the effect can target multiple faces.

“The effect makes users the star as the Screaming Hand becomes a person’s face,” said Matt Mason, R&R’s chief strategist. “We wanted to create a simple yet highly interactive experience that further elevates awareness and engagement around the Santa Cruz Skateboards brand on social media.”

R&R Partners began pitching the client in May and won the business in October. This is the agency’s first work for the client and Santa Cruz Skateboards’ first AR-related initiative.

The brand is launching the effect in tandem with its five-part weekly webisode series, Santa Cruz (SC) Minions, which can be viewed on the Santa Cruz Skateboards YouTube channel. The series focuses on a small, but mighty, part of the SC team: skaters age 15 years and under from all over the world. Santa Cruz Skateboards will give the AR effect to some of “the Minions” leading up to the premiere of the second episode of the five-part series to further engage with its community of followers and have them try it for themselves.

Developing a 3D model of the Screaming Hand was a challenge since it has only really been created within 2D environments. The talented 3D design team at R&R Partners was able to reference various pieces of Screaming Hand art to ensure they properly created a 3D version of the art. Once blessed by Santa Cruz, R&R was then able to focus on just how much animation would be triggered by a user’s face to bring the iconic hand to life.