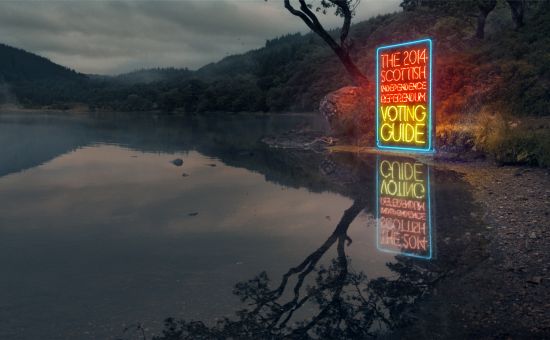 The Electoral Commission has today launched an integrated marketing campaign, created by DLKW Lowe, promoting an impartial guide to voting for the independence referendum, which is being sent to every household in Scotland.

The Voting Guide, also designed by DLKW Lowe, is being sent to over 2.5 million households and contains factual information on how to register to vote and the different ways of casting a referendum vote. The 12 page guide also contains information from the two lead campaign groups at the referendum, Yes Scotland and Better Together, along with a joint statement from the Scottish and UK Governments on what would happen after the referendum in the event of either a ‘yes’ or ‘no’ result.

DLKW Lowe has produced an ‘unmissable’ integrated campaign including TV, radio, OOH, print and online advertising, that will raise awareness of The Guide and remind people that they need to be registered to vote by the 2 September deadline.

The visually arresting TV spot, entitled “Unmissable”, is directed by Nadia of Academy Films (credits include music videos for The 1975, Naughty boy, Maverick Sabre and Rae Morris). In this serene and evocative film we see a neon sign juxtaposed against Scottish landscapes and typical urban scenes.

Jamie Elliott, Managing Director DLKW Lowe comments, "Our job was very clear: to cut through the debate and noise to ensure that anyone who can vote in the Scottish Independence Referendum is equipped with the info to do so.  We focused on creating an 'unmissable' front cover to the leaflet that will be going through every letterbox and built the integrated campaign out from that key distinctive visual: it is the hero of the campaign; one in keeping with an event many do not want to miss."

Alex Robertson, Director of Communication at the Commission, said:“Our TV, radio, online and billboard campaign is geared towards people in Scotland looking out for our impartial booklet coming through their door. People will have seen and heard a lot about the referendum already so we wanted to create a campaign that stands out from everything else.  We’re delighted with the result.   It’s also great to have got so many partners onboard, including Facebook, who will be helping millions of people in Scotland see our guide in their newsfeed.”