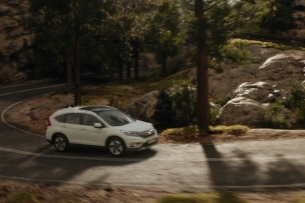 Employing a hypnotic visual illusion to show Honda’s pursuit of perfection, a CR-V chases a never-ending spiral road – a world within a world, infinitely looped. Kelly Cook Jackman caught up with Scot to discuss the making of this mind-boggling feat.

KCJ> Both the commercial and the online interactive content on YouTube are brilliantly crafted and spectacular pieces of visual trickery-pokery…. Tell us more

SC> The brief and challenge was to create the illusion of endlessness in a real world using a moving car.  It’s what’s called the Droste Effect, creating a world within a world.  And it was no mean feat.  In fact it was something like four months of intense racking of brains, scratching of heads and a whole bunch of maths.  But the end result is a fantastic hypnotic video loop of the car moving around and around a 3D miniature replica of the South Dakota Pigtail Bridge.

KCJ> Who would have thought the editing process would be so important in a film like this… What was your contribution to this visually hypnotic illusion?

SC> I got involved for about 2 weeks before the shoot and then we cut for about 2 weeks after.  As there is so much fine detail and various permutations especially with the interactive content, we took the best takes of the diorama-style model. We checked amongst other things; the main daytime shots, the right amount of dust in the frame, the night selects, the wet roads as well as flat light for transitioning between day and night.  It was crucial for the edit to feel seamless and maintain the impression that the film is one constant long take.

There was also a lot of stop frame animation so the spray of headlights looked real on the model.

KCJ> What happened then?

SC>An awful lot of stitching together!

KCJ> Must have been an interesting job for you, aren’t you a bit of a car geek?

SC> I guess I’m known to be quite fond of cars though not so much an obsession more appreciation.

SC> Yeah music was key.  Chris and I did a lot of track research before Twisted Nerve was selected. From an editing perspective we were constantly playing with the day to night and night to day transition, again to maintain the seamlessness.

KCJ> The film is hugely complicated but looks so simple?   How is it so seamless looking?

SC> Well the idea is based on an object that looks similar at vastly different scales that disappears and reappears from behind itself  - in this case a rock and a mountain. A road emerges from the side of a mountain and spirals under itself. The camera tracks into and around a rock within the loop revealing it to be the reverse of the mountain and because the last frame is visually identical to the first frame, it creates what appears to be an endless loop.

SC> Ha Ha…Yes it was really.  But Chris Palmer is a perfectionist and a stickler for craft & detail so absolutely loved the challenge of fathoming this puzzle out. In fact Tom (Sparks), Lewis (Saunders) and Chris did A LOT of maths and scratching of chins and together they cracked the code and solved the conundrum.

KCJ> So all credit to them then?

SC> Absolutely… Lewis is a whizz with numbers.

KCJ> Did all this number crunching affect the edit process?

SC> It did actually.  We worked out in the edit that the ultimate length of the commercial would be 40 seconds after the ultimate speed of the car was worked out and locked off.