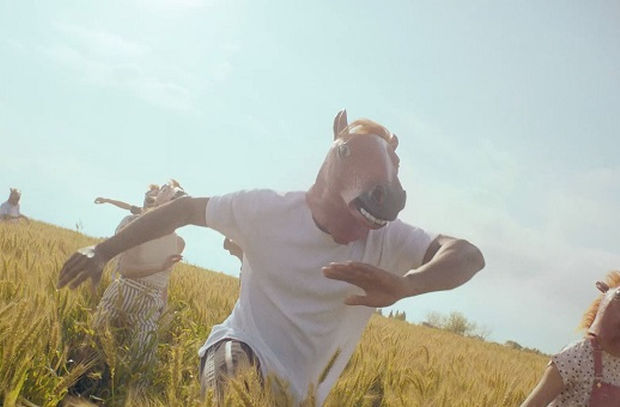 Great Guns’ Tal Zagreba has directed a brilliantly zany new campaign for Schweppes to launch its new energy drink. Creatively devised by Grey Tel Aviv and produced by Rabel, the comedic new ad expands the beverage brand’s appeal to younger audiences by harnessing the power of the meme.
Centring around the idea that Schweppes Energy unlocks ‘a different kind of energy’, the ad focuses on what happens when a group of friends decide to test it out for themselves… to deliciously surprising results. Suffice to say, things get pretty weird – as one sip unleashes a whole world of wackiness and wild shenanigans involving horse-head masks.
Tal Zagreba worked in close collaboration with the creatives at Grey Tel Aviv to create the punchy campaign. He comments: “Schweppes Energy is a completely new drink and its slogan is ‘A Different Kind of Energy’ – so we had to meet the expectations. Our target audience was the 16-24 age range, so we had to raise the level of nonsense and madness of the campaign. We decided to take ownership of the internationally famous meme and internet trend: the horse mask – which I personally adore. My goal was to create something fresh, easy-going, funny and a bit stupid all at the same time – like a spontaneous joke between friends. Along with Grey Tel Aviv’s brilliant creative directors Asa Keren and Yonatan Title, we wanted to get wild, and what could be wilder than a bunch of wild-horse-masked-millennials?”
Commenting on the complex logistics of the shoot, Tal says: “The biggest challenge was to find a wheat field during wheat-harvesting season. Several times, we found the perfect location, only to return a few days later for scouting to find no wheat left! Even on the day of the shoot, I was astonished to see that part of the wheat had been harvested. Fortunately, they had left us enough to work with – even if we had to fake some of the shots and run in circles. I’d like to thank Schweppes Israel, Rabel Films, and Grey Tel Aviv for choosing and trusting me to create this awesome campaign.”
view more - Creative