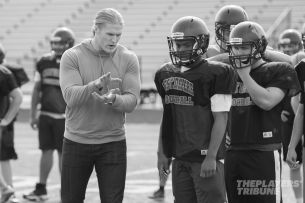 Production studio Scatterlight Studios recently completed work on 'Scouting Myself,' an original new digital series on The Players’ Tribune that offers elite high school athletes an opportunity of a lifetime — to learn straight from the pros themselves as they aspire to make it to the next level.

New episodes will roll out weekly on The Players’ Tribune, the new media platform launched by New York Yankees legend Derek Jeter that provides athletes with a platform to connect directly with their fans, in their own words. Featured athletes in the series include: NFL players Clay Matthews, Greg Olsen, DeMarco Murray, and Larry Fitzgerald; WNBA players Elena Delle Donne and Maya Moore; and NBA All-Stars Paul Pierce and Harrison Barnes. Each superstar unexpectedly pops in during the filming segments of the high schooler they’re paired with. From the film room to the practice field, the relationships unfold as each pro imparts his or her own wisdom and insights to achieve excellence. The series was created by The Players’ Tribune in partnership with American Family Insurance.