Say 'Thank You' in a New Way with Nexus & Mullen's 'ThankList' 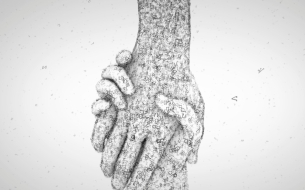 Nexus Interactive Arts (NIA) has collaborated with agency Mullen on behalf of American Greetings Corporation, a leading greeting card company and manufacturer of innovative social expression products, to create the ThankList; a digital experience that encourages everyone to start practicing gratitude by writing their own ThankList. All messages of thanks are aggregated into a collective, never-ending ThankList.

At the heart of the experience Nexus director, Factory Fifteen, created an elegant particle-based film that can be seamlessly customized to thank up to four people and shared via Twitter, Facebook and Google+. In addition to the customised thank you notes embedded in the film, users are also able to input their own photo to be rendered in particles as part of the big reveal at the end.

Factory Fifteen, says, “People often underestimate the power of a thank you, which so often never gets said. We've enjoyed working on this project as it brings together pre-rendered and dynamic animation incorporating the user's chosen text and image to create a bespoke film. While the animation team focused on the main structure of the ThankList film, the web team produced the website framework and the interactive personalised part of the film, incorporating the user’s chosen text and image into the animation.”

The website invites users into a simple yet mesmerising typographic WebGL cloud interface which gently leads the user into a world of Thank You’s, where they can explore, be inspired, contribute creations and watch the ThankList grow.

The Explore section can be experienced in three viewing modes: cloud, list and trends - each offering a unique window into the many ways in which we are able to express these simple but powerful words. The Create section gives users the opportunity to either tailor their messages into a bespoke animated film or express their gratitude in a longer individual message. The Watch section houses documentary films directed by two-time OSCAR® winning filmmaker Barbara Kopple.

The experience is supported by a scalable cloud-based architecture to sustain varying traffic loads, and a robust dynamic rendering system for the creation of the seamless customised films.

The website is supported on all the latest browsers across desktop, tablet and mobile with the end product available to share via Facebook, Twitter and Google+. To write your own ThankList and learn more about this movement encouraging gratitude, visit Thanklist.com.