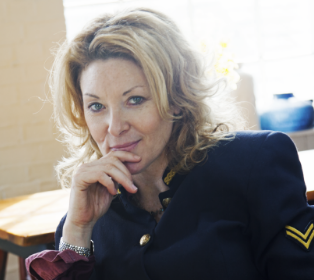 The signature of Timoner’s projects is a focus on “impossible visionaries” who prevail against personal and cultural odds. Her slate of accolade-studded documentary and film work includes  Dig! (2004), Join Us (2007), WE Live In public  (2009), Cool It (2010), Brand: A Second Coming (2015) and the recently released 10 hour Viceland documentary series Jungletown, among others.

Click HERE to view a selection of Timoner’s work.

MAPPLETHORPE portrays the portrait photographer’s humble beginnings in New York City, his rocky road to success and his subsequent controversies alongside other creatives of the 70s and 80s artistic era, prior to his untimely death in 1989.

Timoner has received the honour of double Grand Jury Prize wins at the Sundance Film Festival: the first for her 2004 documentary DIG!, reflecting the oftentimes contentious relationship between the bands The Dandy Warhols and The Brian Jonestown Massacre, and the second for her 2009 feature WE LIVE IN PUBLIC on Internet entrepreneur Josh Harris. Her dynamic directorial style challenges viewers to connect with characters and in turn face their own deep-seeded dilemmas.

“I really enjoy the process of working in the commercial world. It’s challenging, in an exciting way, in that one must capture the heart of the story, often times casting on the spot, in a matter of days,” notes Timoner. “Rupert’s body of work in branded content, which he’s created with some of the greatest filmmakers around, impressed me. I also appreciated how selective he is about who he works with.”

Originally from Miami, Florida, Timoner graduated from Yale University after majoring in Theater and American Studies focusing on film and literature. She led her craft into documentary filmmaking work with The Nature of the Beast (1994), a TV documentary film on Bonnie Jean Foreshaw--who received the longest prison sentence of any woman in the state of Connecticut--and the inner workings of the American prison system. Timoner has recently penned a script on her father, Eli Timoner, who founded the fastest growing airline in American history prior to an accident that caused bankruptcy and a lifetime of paralysis.

She currently resides in Los Angeles and maintains a close relationship with both of her parents and her son, Joaquim.