'Save the Kitten' Internet Telethon 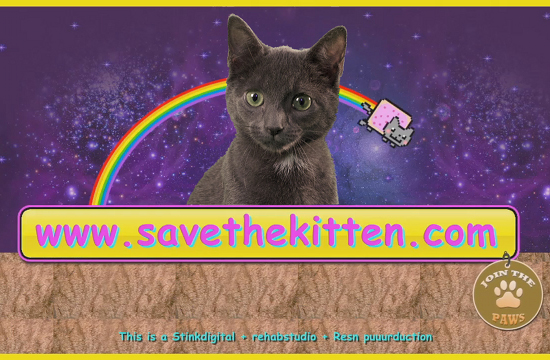 How do you mobilise the Internet to stand up for itself? By threatening to take away the thing it loves most. A new campaign from three of the world’s top interactive production companies aims to bring levity and awareness to the increasingly important issue of Internet freedom by making kittens its centrepiece.

‘Save the Kitten’ is an internet telethon that puts the fate of a live-streamed kitten named Webster directly into viewers’ hands. When users do something positive to create awareness, like sign the petition for the Declaration of Internet Freedom, good things happen to Webster. When users do nothing, ‘bad’ things happen. The drama will play out over the course of 24 straight hours, beginning at 12 noon EST on December 3rd. www.savethekitten.com will feature an array of original content, including a special appearance from the Internet's other most famous cat, Lil Bub.

In early 2012, strong public opposition forced the cancellation of votes on two potentially dangerous bills, SOPA and PIPA. This victory for the internet was led by the Internet Blackout on January 18, 2012 by Google, Wikipedia, Reddit, and hundreds more. Today, broad language in security bills like CISPA continue to threaten an open and free internet domestically.

And yet, globally, the state of the issue is dire. In a few weeks, leaders from various countries will participate in a closed door meeting to decide whether to expand the mandate of The International Telecommunications Union (‘ITU’).

Up until now, it's been dealt with in a characteristically stuffy tone that's at odds with the ordinary user. By turning kittens into a metaphor for Internet freedom and using humor to tell a story, Save the Kitten hopes to open the discussion up to a whole new audience. The production companies and partners behind this project depend on policies that support an open and free internet. The same is true for the agencies, brands, and people that we serve.