Mizkan Europe launches 'Your chips will love you for it' 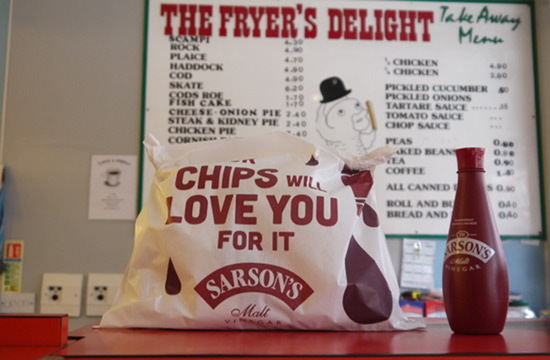 To coincide with this year’s Chip Week (17-23 February), Mizkan Europe is launching a Sarson’s branded chip bag, available in fish and chip shops nationwide.  There will be 100,000 bags available across the UK for a two week period, with the phrase “Your chips will love you for it” emblazoned across the front, alongside the Sarson’s logo.

Part of a wider marketing push in the run up to Chip Week, the bespoke bags - designed by mcgarrybowen - aim to remind consumers that when they think fish and chips, they should think Sarson’s. The focus of the activity will also be to harness latent love for the brand which is synonymous with chips, during the national week celebrating the fried potato favourite.

There will also be a chance to sample the product in-situ at fish and chip shops. Through the ambient marketing campaign secured by UM London, Sarson’s will also be positioned on the counter rather than behind it.

Kuni Tsukada, Sarson’s Brand Manager, Mizkan Europe said:, ‘As the authentic malt vinegar we identified Chip Week as the perfect opportunity to engage with our consumers. The bags should spark conversations whilst reminding consumers that there is no better partner for chips than Sarson’s’

Sarson’s Vinegar was bought by Mizkan Europe in February 2012, as part of the £41 million acquisition of a number of Premier Foods’ brands including Haywards pickled vegetables and Dufrais.