Sarofsky Corp. Heads on the 'Road to Berlin' for National WWII Museum 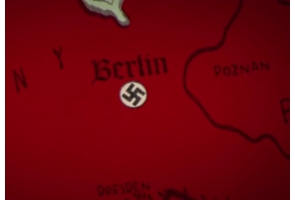 The new "Road to Berlin" exhibit occupies the first floor European Theater galleries within the Museum's newest pavilion, Campaigns of Courage: European and Pacific Theaters.  A major component of the Museum's capital expansion, these galleries powerfully immerse visitors within the war that changed the world, educating them on why it was fought, how it was won, and what it means today.

For the commercial assignment, Sarofsky's team (led by executive creative director Erin Sarofsky and creative director John Filipkowski) was invited to produce a nostalgic vision artfully uniting archival footage with an animated map.  Conveying the dramatic path taken by U.S. and Allied forces as they made their way toward Berlin from many points on the globe, the spot's ultimate goal is to attract visitors to the new exhibit.

As seen in the finished project, the Museum afforded the production team access to its private archive of World War II footage.  "We received roughly 40 minutes of WWII archival footage and paired it down to about 15 shots for the :30 spot," Erin said.  "The footage spanned all fronts of the war and some of it was pretty graphic.  Although much of it was not used, going through it definitely brought some weight to the project from our perspective."

Designing an animated globe leveraged more of Sarofsky's creative talents.  The team was given a map from the 1940s for reference purposes, which was then traced line-by-line using Adobe Illustrator to re-create it as vector art for their animated scenes.  A textured pass of that image was rendered at 30,000 pixels wide, before being imported into Maxon's Cinema 4D, which Sarofsky's artists used to model, animate, texture and project the archival footage onto the globe.

"Cinema 4D is a great tool, and it easily churned out multiple render passes, all of which were brought into Adobe After Effects for compositing and finishing," John explained.  "The seamless workflow between After Effects and Cinema 4D allows us to share camera data for added effects while at the same time giving us infinite control over our final look."

"Through the leadership of our clients at the Museum and agency, we had access to historical expertise that allowed us to focus on the creative aspects instead of stressing over facts," Erin added.  "Together, we all are hoping that our work, portrayed in a beautiful, compelling way, drives people who wouldn't have already known about the exhibit to go out and see it."

To learn more about the National World War II Museum and the "Road to Berlin" exhibit, click here.