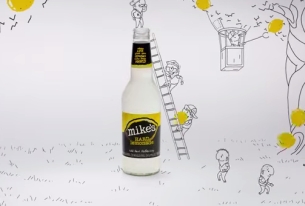 Erin Sarofsky and her team at design-driven creative production company Sarofsky Corp. were commissioned by fellow Chicago-based company Mike's Hard Lemonade Co. and creative agency TRISECT to create an innovative video piece.  The spot features an illustrated world where the essential qualities and the history of mike's shine. The spot recently launched on the brand's YouTube channel as a precursor to the 2015 summer campaign.

"We set out to tell a story about the high-quality ingredients that make a mike's hard lemonade so refreshing," explained Sanjiv Gajiwala, VP of Marketing, Mike's Hard Lemonade Co.  "A lot of brands in the alcohol beverage category talk about quality, but mike's is an authentic, unconventional brand.  Rather than show sweeping shots of verdant lemon groves, we chose to capture this story in a way as unexpected as the brand itself."

This distinctive approach was a great fit for Sarofsky, whose team specializes in innovative, diverse work. "Mike's is a fun and irreverent brand, so our goal was to showcase that with all the little details we added," said Erin. "We guarantee that you will see something new every time you watch it."

"Our creative approach on this job was to give movement to a static bottle by creating a fun animated world around it," added John Filipkowski, Sarofsky's creative director.  "We kept the illustration style and color palette very minimal, which allowed us to let the hero bottle, as well as all of the personalities of our characters, shine."

Although the animated characters and world Sarofsky's artists created were obviously central to the project, so was the original HD product cinematography of that hero bottle.  That footage was captured tabletop-style in Sarofsky's in-house studio.

Sarofsky's artists created their characters and worlds using Adobe Illustrator, then imported the vector artwork using various puppet tools and inverse kinematic rigs to infuse them with life and personality.  With their live-action passes graded in the company's Autodesk Smoke Suite, and additional animated elements created using Maxon's Cinema 4D and Autodesk Maya, The Foundry's Nuke was used for compositing and clean-up.  Final animations and composites were then finished using Adobe After Effects.

"Producing a project like this entirely in-house from beginning to end is especially great for us," Erin concluded.  "We love how it turned out, and we all look forward to continuing our relationship with Mike's and TRISECT."