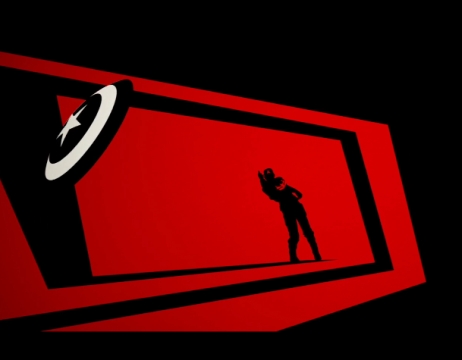 Until now, the only way to see Sarofsky's actual main-on-end title sequence for "Captain America" was on the big screen, where the film has now grossed over $700 million worldwide since its April 4th U.S. debut. At last, coinciding with today's Blu-ray release of the film, Erin and her team can now finally show and detail their work.

It's worth noting that over the past five months, the company has done a lot to expand its own superpowers. Thanks to further investments on Erin's part, Sarofsky made it onto Disney/Marvel's top-tier approved vendor list. And in case you haven't heard, Sarofsky also designed the main titles for Marvel's phenomenal "Guardians of the Galaxy," which just surpassed "Captain America" as the top grossing film of 2014.

Captain America: The Winter Soldier - Main On End Titles from Sarofsky on Vimeo.

"We are striving to be a creative powerhouse on a global level," Erin explained. "What's great about these projects from a business standpoint is that they have elevated our visibility. They've given us the type of notoriety that's hard to achieve over a whole career... let alone over our five-year run. So now, looking forward, I'm excited to see how we continue to evolve."

The artistic vision of the winning treatment put Erin and her colleagues in familiar territory, creating stylish, thoughtful animation that heightens viewers' experiences in watching feature content. However, the challenge of delivering both in 2D and stereo 3D was a new one for their operation, as was the ability to view the 4K stereo files for internal reviews.

As a result, the team relied on RV from Tweak Software for playback, which reportedly handled the stereo flawlessly. They also used Autodesk Smoke for conforming and playback to a 4K 3D television monitor. That toolset worked great with their existing pipeline, which was designed around Adobe After Effects, The Foundry's Nuke, Maxon's Cinema 4D, and Softimage.

Discussing the feedback process, Erin praised Marvel as a well-oiled machine, where the depth of talent and positive energy provide clear reasons for the success of its films. "The key decision makers all have very refined perspectives," she said. "They know what they like."

Finally, Erin commented on her takeaways from this experience. "As a designer in the main title arena, working on Marvel movies is as big as it gets. Having the opportunity to work at this level is where we all hope our careers will take us. As a business owner, I'm really proud to have been able to provide this opportunity to each of the talented artists and producers that worked on this project, and I'm excited to see how their careers are impacted by it in the long run."