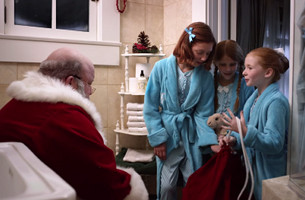 The Christmas Yule log gets a whole new meaning in this most unsavoury of Christmas spots. In the film for Poo-Pourri - the pre-dung toilet spray and creator of viral hit ‘Girls Don’t Poop’ - all the milk and cookies catch up on Father Christmas his poor overworked bowels.

Santa Claus drops his load (of presents) before sneaking into a British family’s bathroom for some sneaky relief, only to get caught by the young children that live there and have a slew of poop-themed jokes aimed at him.

The film was written and directed by Pete Marquis and Jamie McCelland, who also worked on this amazing mail-order tampon spot.