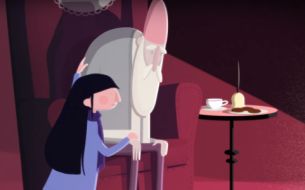 This week, Alzheimer’s Research UK (ARUK), launches Santa Forgot, a disruptive and beautiful animation that imagines a world where the magic of Christmas has been lost because Santa is living with the effects of dementia and no longer visits children across the world on Christmas Eve.

The attention-grabbing concept highlights the varied symptoms and social isolation of dementia and raises awareness that the diseases that cause it, most commonly Alzheimer’s, strike indiscriminately and really can affect anyone, even Santa.

Santa Forgot’s central character is a young girl called Freya, who has grown-up in a world where Santa has stopped visiting on Christmas Eve. On learning about Santa’s condition, Freya travels to the North Pole. She offers her own support and re-mobilises the redundant elves as researchers, explaining her belief that ‘if Santa has a disease, research can find a way to fix it’.

Through the depiction of Freya and Santa’s elves, ARUK showcases that only with world leading research, new approaches and innovative thinking can the diseases which cause dementia be defeated.

Dementia is the world’s greatest medical challenge, not only for the individuals affected and their families, but also for society as a whole. Over 850,000 people in the UK have dementia, and the condition has an economic impact in the UK of over £24bn a year, more than cancer and heart disease combined. It is also the leading cause of death amongst women in the UK.

Hilary Evans, Chief Executive of Alzheimer’s Research UK, said: “Santa Forgot is a poignant and powerful reminder that dementia doesn’t discriminate. We have to be provocative about dementia, to help fight misconceptions and fatalism around the condition and to demonstrate that pioneering research holds the answers. Santa is an important cultural figure, but the idea that he too could be affected drives home the point that dementia can strike those most special in our lives.”

“Dementia is one of our most feared conditions, but misunderstanding persists that it is an inevitable part of ageing. Santa Forgot, like previous campaigns from Alzheimer’s Research UK, makes the simple point that physical diseases drive dementia, most commonly Alzheimer’s. We have made enormous strides against diseases like cancer and AIDS, and with the right research we can do the same for dementia. Santa Forgot reminds us to believe in the power of research.”

Stephen Fry, narrator of Santa Forgot, said: “From the moment I was told about Santa Forgot I wanted to lend my support - it is an inspiring and beautiful take on a Christmas tale. I urge people up and down the country to get behind the campaign so we can fuel the fight against dementia and take a step forward to making it history.”

Liz Ayre is an Alzheimer’s Research UK Champion. Liz lost her husband Mike to early-onset Alzheimer’s in 2013 aged just 51. Their daughter Ciana voices Freya in the animation. Liz said: “Santa Forgot is beautiful, sad and hopeful all at once and stirred so many different emotions when we watched it. The film shows that dementia doesn’t discriminate: it affects people from so many different backgrounds from nurses and teachers to world leaders and eloquent writers. If we’re ever going to change how society views, or often ignores, dementia, we have to be a bit confrontational and challenge people’s misconceptions. I hope Santa Forgot gives people two minutes to think about the impact of dementia this Christmas, and be inspired by how we can change the future with research. I’m proud that my family has been involved in the campaign, and to hear Ciana bring Freya’s voice to life in the animation is a special moment for us and a great tribute to Mike.”