Trends and Insight 300 Add to collection

Budgets tend to be smaller in San Francisco – but that doesn’t matter, discovers Addison Capper 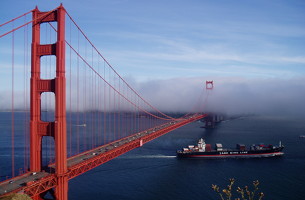 “I think people move to San Francisco to get out of LA or New York and to come to this beautiful, eclectic city and take risks.” Ryan Simon, Partner, Strike Anywhere

When speaking with ad folk from San Francisco, the general thought is that the budgets they deal with, when compared with cities like New York, Los Angeles and Chicago, tend to be notably smaller. But what also becomes apparent is that it just doesn’t matter. Because the clients are more open to the type of brave, innovative ideas that all of adland is striving for right now.

Silicon Valley’s most famous and successful companies have a history of making their name through brilliant product building – and without reliance on advertising. Facebook, Google, Uber, Tesla and Apple all grew thanks to innovative products, remarkable experiences and the power of earned media.

Lowe Profero San Francisco Managing Director, Matthew Day, is a believer that this mindset has trickled right through the Valley. “In my view, Silicon Valley has a more skewed ‘product first – advertising second’ mentality,” he comments. “This approach has proven to work for what are now some of the biggest companies on the plant. Startups and established companies alike aren’t blind to this. Whether conscious or not, this is a mindset that exists in the area and is more likely more prominent here than in other markets.”

Mimicking the likes of Apple et al. is an appealing idea in theory – but in reality, a lot of the startups have a need to be product-led at first to actually get the business off the ground. Despite the amount of money that can fly around in Silicon Valley, whether it be through company valuations, salaries or acquisitions, startups in Silicon Valley have the same startup problems – for want of a better term – that any other new business does. Cash is tight and has to be invested wisely.

“Startups don’t always invest in their brand until they are a bit more established,” says Kelly Johnson, Managing Director, twofifteenmccann. “When they do turn their attention to brand building, they often have to prove brand ROI to their boards or investors and typically start with small tests before investing heavily. The problem is that if the tests are too small they don’t actually approximate real market conditions at bigger budgets. Tricky but commonplace here.”

Ad agencies everywhere have been radically changed by tech behemoths, but that influence runs much deeper for adland in the Bay Area. After all, the startups of their doorstep are known for doing incredible things faster and cheaper than others see it possible. So how does that can-do, nothing’s-gonna-hold-us-back attitude trickle down?

“By embracing a culture of fearless experimentation, pared-down decision making, and do-it-yourself audacity,” believes Eleven Inc Founder and Creative Director, Rob Price. “Partly because agencies here often work for these companies and partly through some kind of cultural osmosis, we’ve learned to work that way too. And it usually turns out to be a good thing.”

And if you look at brands operating in traditional industries in the area, Price’s theory of cultural osmosis sings true. Virgin America is centred in the region and has undergone rapid growth since its launch in 2007 with its mission to ‘make flying good again’ – a nod to the product-led, experience-based approach we mentioned earlier.

In fact, Eleven Inc recently completed ‘Blah Airlines’ for the brand, the longest pre-roll video in history. “It was six hours of in-flight monotony, starring a cast of lifeless mannequins and shot in one excruciatingly long day,” explains Eleven’s Price. “In spite of its severe financial constraints – no, because of them – that video attracted 900,000 views on YouTube and attracted heaps of press.”

It’s often said in advertising that the industry’s best examples of innovation come not from big budgets and backing but from minimal funds and the need to actually get creative – “the mother of creativity is limitation,” so says Lowe Profero San Francisco Managing Director Matthew Day.

Matthew goes on to explain that that innovative mindset isn’t just constrained to campaigns for ad agencies and their partners. San Francisco’s creative spirit is inspiring brands to launch more surprising stunts and initiatives. “They are taking the risk to invest marketing dollars into less predictable initiatives such as customer experiences, product innovation and brand-driven content – which all rely on the power of consumer conversation – rather than the power of traditional advertising.”

The benefits of having Silicon Valley on their doorsteps are also reaching the local production industry. Strike Anywhere has had a run of direct-to-client work with many of the big tech gurus, including a recent campaign with Flipboard that involved cinematic documentary pieces with three of the brand’s magazine makers – nuanced visual storytelling that was off product.

Ryan Simon, Partner at Strike Anywhere, reckons smaller companies have been inspired by Apple. “Apple has been changing marketing and creativity for ages. And they keep doing it, constantly reinventing themselves and reaching audiences in different ways,” he says. “Slightly smaller tech brands are also forcing themselves to tell better stories and elevate their profile.”

Ryan’s business partner Mike Jacobs gives a nod to Facebook. “Facebook is probably the best example [of commitment to content and working with great filmmaking talent]. In recent years they’ve gotten really adventurous with their content. They are really pushing the envelope with both the volume of output and the variety of the work. And they continue to partner with quality filmmakers and production vendors.”

Great minds, great thinking and great advertising isn’t a new concept for the city. In addition to tech stalwarts like Xerox, Stanford, IBM and HP, the surrounding area is also home to that fairly well-known space organisation NASA. Hundreds of thousands of the world’s brainiest flock to the city, bringing with them billions of dollars in private, public and government funding. And let’s not forget San Francisco’s role in the American cultural revolution of the 1960s – the city’s Haigh-Ashbury was a key centre for the hippie movement. Then in the 1980s, the likes of Publicis’ Hal Riney and Goodby Silverstein’s Jeff Goodby essentially redefined what advertising was all about. And in the 21st century San Francisco is doing it again.

“San Franciscans have been inventing the future forever,” says Cibo Co-founder and CEO Lu Lacourte. “And I don’t see that changing for as long as imagination and curiosity is the thing that drives human prosperity.”