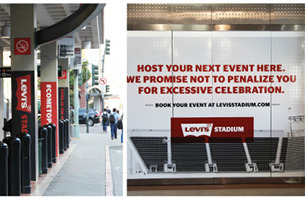 Further solidifying what has been a long creative partnership with the San Francisco 49ers, San Francisco-based creative ad agency Hub Strategy & Communication teamed up with the five-time Super Bowl Champions to promote Levi’s® Stadium, the new home of the San Francisco 49ers. To promote the many impressive features of the new venue, Hub conceived and created a multi-faceted advertising campaign that includes extensive radio and television promotional spots, out-of-home (OOH) advertising, print campaigns, and much more.

“Levi’s Stadium is not only an amazing new home for the 49ers but also an amazing place for the entire Bay Area to enjoy, even when there’s not a game,” says DJ O’Neil, CEO at Hub. “A big part of our creative concept for this campaign was to give this multi-use stadium its own personality. To accomplish that, we decided to use the stadium’s state-of-the-art scoreboard and screen to convey the unique voice and remarkable features of the new venue.”

A series of upcoming radio and television spots feature the unique voice of the Levi’s® Stadium scoreboard touting the many impressive features of the new stadium, including the engaging 49ers Museum, luxury suites, and a wealth of spacious venues for private events. That same voice and personality can be seen in the OOH and print campaigns, which include a unique takeover of Caltrain commuter services, particularly in the Santa Clara area.

Levi’s® Stadium is regarded as the most technologically advanced stadium ever built. With seating for 68,500 spectators, the new stadium is already set to host Super Bowl 50 in 2016, as well as events including international soccer, Wrestlemania 31 and college football’s Pac-12 Championship Game.