Samsung's “When The Night Falls” 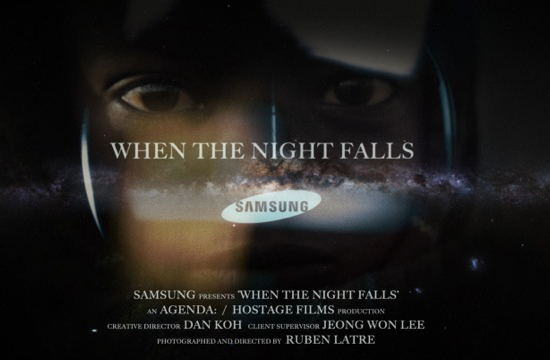 With no running water and no electricity, the Oromia Region of Ethiopia is a rugged five-hour drive from the capital Addis Ababa. Ruben Latre of Hostage Films found himself there to direct a short film created as part of Samsung’s ongoing social responsibility efforts. Samsung's contribution to the region, in partnership with a local NGO, comes in the form of solar panels that, in turn, are used to charge lanterns; providing the only light source to the dark terrain, other than the sun.

Due to remoteness and travel restrictions, Latre was brought onboard as director, DP, and crew of one; shooting two cameras on location. It was a stark contrast to New York City, where the director is based. The village houses are made of straw; the floors, of dirt. The technology for metalwork and fabric resembles colonial American museums. Similarities were abundant as well; people are people everywhere.

The film tells the story of a young girl Aster and her village, whose lives are transformed by the gift of light. A preview trailer, crafted by Latre

Melissa Beth, EP of Hostage Films, remarks, “The incredible thing about Ruben is he is equally at ease directing a 50-plus person crew, working alongside Academy Award winners, as he is taking a 5D kit and being dropped in the middle of the mountains. He will always film the sunrise and he will always produce stunning results.”

Latre’s eye for cinema earned him Best Director titles in the US and in his native Spain. His work has been featured at AICP, the DGA, in Creativity’s Top 20, and he was selected by Vitruvio/LeoBurnett to create a spot paying homage to Ridley Scott. This year, in addition to the aforementioned Samsung project, which filmed in Ethiopia and Istanbul, Ruben Latre and Hostage Films worked in Kiev for OgilvyUkraine, in Haiti and Tanzania for the Abbott Fund, in New Zealand for Y&R NY, and in New York for clients including DraftFCB, Microsoft and Ralph Lauren.

Hostage Films is a woman-owned company run by Melissa Beth and represented by Laura Zinn of Zinndependent.

When the night falls - 'trailer' from Ruben Latre on Vimeo.