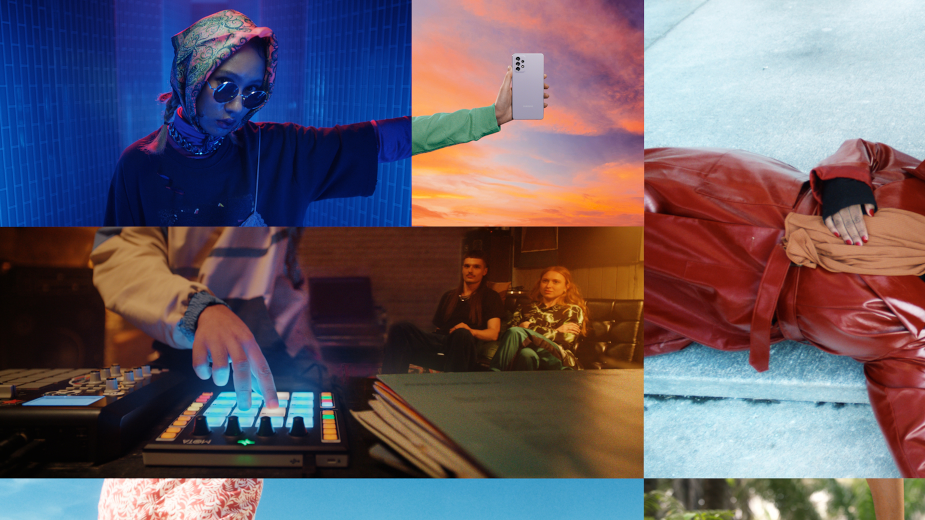 There are two things you should know about the new Galaxy A smartphones: they are awesome and they are for everyone. This makes them the go-to devices for a young generation of content creators around the world, which is why Samsung partnered again with creative agency Wieden+Kennedy Amsterdam to develop the latest campaign under the ‘Awesome is for everyone’ platform, helping to bring these young creative minds into the spotlight.

In 2019, we all learned that the Galaxy A has an awesome screen, an awesome camera, and long-lasting battery life. In 2020, Samsung took a step further by giving everyone first-hand experience of how the awesome features of the Galaxy A actually work. This year, the global campaign is a celebration of all of the awesome things people do when they have access to great smartphone technology.

But instead of just speaking to global creators, Samsung is collaborating with them. They don’t just take technology at face value; when their optimism meets their hands-on improvisation, they create the behaviours, memes, crazes, dances and music that  inspire the rest of the world. They aren’t just future smartphone buyers; they are where the future is created.

They don’t want brands selling them innovation; they want to be innovation. So in this year’s campaign, Samsung is celebrating and elevating the awesome creators and communities from around the world who are pioneering and remixing what smartphone technology can do for them, like The Critics, a troupe of Nigerian teenagers making sci-fi movies on their smartphones.

Matthew Leem, vice president of Samsung Mobile Marketing, says: "Gen Z is potentially one of the most creative generations in human history. These social savvy creators leverage their smartphone as a tool to turn their ideas and passions into reality and share them with the world. When armed with the right technology, their creativity is endless. That’s why Galaxy A's mission is to make premium features more accessible to everyone, enabling more creativity and connections with the world. It's our privilege to work with the most remarkable young creators worldwide and observe how they realise their vision with our technology."

In the 30-second Official Launch film, Samsung brings together creatives from all around the world to collaborate and build an exciting and dynamic mosaic inspired by the Duet chains and culture of co-creation on social platforms. They start with one piece of footage and encourage other creators to join and add something to the story, forming an endless mosaic that builds a strong sense of connection with others around the world – the new phenomenon of global culture sync in action.

The film takes the viewer from a Bangkok tattoo artist Parangew, to Jonathan Neguebites dancing on a beach in Rio, to a twins rap duo Ain't Afraid in Michigan, to the first Nigeria's skate crew Wafflesncream, to Vogue choreographer Alina Ryzhkova in snowy Kiev, to Kurdish-British model and activist Deba, and so on. The ride is accompanied by a remix of the iconic techno banger that highlights the awesome benefits of Galaxy A: “Awesome screen, awesome camera, long lasting battery life”. In addition to the Official Launch Film, and using the same mosaic technique, there are six 15-second feature films that highlight the new features of the newest Galaxy A72,

The campaign is also supported by two elaborate Official Introduction Films, that dive into the great new features of the newest Galaxy A72, A52/A52 5G and A32 that will help creators build and participate in global culture. Hawaii-based MaysMemes lends her oversized jackets to show off the display while Hydroman, an underwater dancer from India demonstrates the new water resistance feature. The alien Lil Mayo, who made an appearance in the 2020 campaign, even makes a comeback to showcase the extended camera features.

Blake Harrop, W+K Amsterdam managing director, says: “We’re always inspired by the way that people around the world use technology in awesomely creative ways, and Samsung’s Galaxy A devices really represent that global creative culture. Our team hails from Russia, Zimbabwe, UK, USA, Spain, Germany, Italy, Morocco, Canada, Singapore, the Netherlands and France, so we quickly realised there were many different cultures we wanted to celebrate in this work.”

The campaign is playing out via a range of assets across TV, digital and social. The Official Launch, Camera & Water resistance feature, and A72/52 Official Introduction films are launching globally, including Brazil, India, Indonesia, Spain, South Africa.

Copywriter (Why Galaxy A): Chris Taylor

Art Director (A72/52 and A32 Official Introduction Films): Florian Barthelmess

Copywriter (A72/52 and A32 Official Introduction Films): Allan Stevenson

Account Manager (A72/52 and A32 Official Introduction Films): Samantha Wolfson

Artist / Title: Phil Kay - A is for Awesome

Publisher (A52/A72 Official Introduction Film): Thomas Slinger in care of On The Money Music Ltd / One Two Many

A72/52 AND A32 OFFICIAL INTRODUCTION FILMS