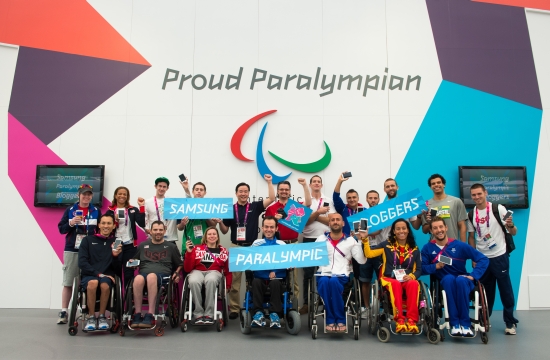 As the Paralympics swing into action, Samsung has released a ground-breaking film called ‘Sport Doesn’t Care Who You Are’ and has unveiled an ambitious first-of-its-kind blogging project, which will see Paralympian athletes blogging from the games. Both projects are designed to challenge viewers to rethink their attitudes towards Paralympics athletes.

The film is part of a pioneering initiative and corporate social responsibility scheme led by Samsung to focus on ability, rather than disability, and to get people behind the London 2012 Paralympic Games. Research shows that more than eight in ten (84 per cent) British people cannot name a single Paralympic athlete, despite Team GB coming second in the medals table in Beijing in 2008. ‘Sport Doesn’t Care Who You Are’ aims to change public perception and ensure that audience excitement stays at fever pitch as we move from the Olympic to the Paralympic Games.
Smuggler director and Academy Award nominee Henry-Alex Rubin was brought on board to direct the film. It aims to be a powerful and honest celebration of athletes and their coaches, and the chemistry between them. Rubin’s film contains behind-the-scenes footage of the punishing training regimes of world-class athletes as they prepare for the Paralympic Games and was created in collaboration with 72andSunny, Amsterdam.
The viral features some of the world’s leading Paralympians, including some Team GB medal hopefuls. Swimmer James O’Shea and Wheelchair Basketball Captain Jon Pollock, as well as Brazilian Judo legend Antonio Tenorio and Spanish Cycling star Raquel Acinas all feature. James O’Shea, who is making his debut at the Games, described it as critical in helping disabled sportsmen and women get the recognition they deserve.
In parallel to the film, Samsung have also launched its ‘Samsung Paralympic Bloggers Program’ designed to help strengthen London 2012’s legacy. The program will see 50 Paralympic athletes from 18 countries representing 16 sports and competing in a variety of sporting disciplines, share their personal London 2012 experience. For the first time ever the public will get an inside look at life in the Village, training sessions and will discover how the athletes strive for excellence.
Chair of London 2012 Organising Committee Seb Coe said: “This project will provide a unique opportunity to get a behind the scenes look at the Paralympic Games through the eyes of the athletes themselves. Thanks to the IPC and Samsung, we have been able to open up the London 2012 Paralympic Games to the world.”
The Samsung Paralympic Bloggers will be equipped with the GALAXY Note that was used in the Opening Ceremony of the Olympic Games. They will all use an app which has been specially developed by LOCOG to cater for the Paralympic Bloggers’ every need. The unique content generated by the athletes can then be uploaded to the Samsung Digital Hub and across all IPC and LOCOG social media platforms at just the touch of a button. For the first time ever, the public can engage with a number of Paralympic athletes – and take part in the London 2012 Games.
Commenting on the Samsung Paralympic Bloggers, Sir Philip Craven, President of the International Paralympic Committee said: “We are delighted that brands like Samsung are putting the spotlight on Paralympic athletes and highlights their hard work and commitment shared with all athletes around the world.  Let all people engage with the bloggers and the London 2012 Games - they are going to be spectacular.”
Athletes who will be blogging throughout the 2012 Paralympic Games include Antonio Tenorio (Brazil), Jason Smyth (Ireland), Raquel Acinas, (Spain), Jeff Fabry, (USA) and Michael Jeremiasz (France) to name just a few.
Sunny Hwang, Vice President and Head of Global Sports Marketing at Samsung Electronics, said, “Samsung has a long history of encouraging integration and equality in sport and the London 2012 Paralympic Games is no exception.  Our 50 bloggers, chosen from around the globe and from a wide range of sporting disciplines, will share their fascinating experiences of the Games. As a committed worldwide partner of the Paralympic Games, Samsung is using its technology to bring athletes and spectators closer together, enabling more people to take part in the excitement and inspiration.”
Samsung’s pioneering initiative - ‘Sport Doesn’t Care Who You Are - Everyone Can Take Part’ campaign - is designed to encourage the public to rethink their attitudes towards Paralympic athletes and to get them to engage in London 2012.
To keep up with the bloggers, check out Samsung’s Olympic hub here: www.samsung.com/london2012