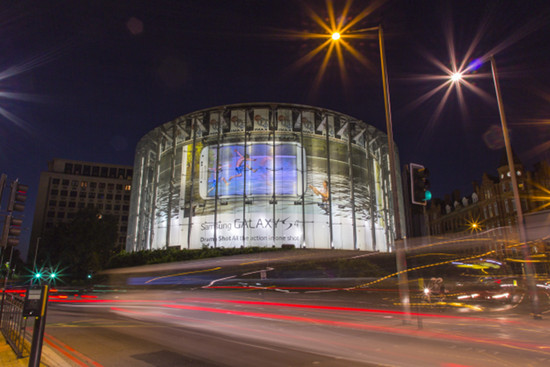 Samsung Electronics today announced a series of out-of-home (OOH) media firsts as it breaks new ground through its use of moving image and sound in its UK outdoor advertising for the Galaxy S4 smartphone.

Samsung has installed two giant digital screens on the London IMAX to showcase the superior capabilities of the Galaxy S4, a first for OOH visual and audio media. The LED screens, each measuring just under 75 square metres, bring to life the phone’s unique Drama Shot feature, which allows you to capture a sequence of still images of a moving subject in one dramatic shot. The screens demonstrate this feature via two moving shots on each screen, one of a boy jumping in water and the second of a girl on a swing tyre.

In another first for digital OOH, Samsung is working with Ocean Outdoor to demonstrate the Sound & Shot feature of the Galaxy S4, which enables you to capture background noise alongside a static image. Speakers have been installed behind the digital screen on Eat Street at Westfield White City. When an image of a guitarist appears on the screen, the music starts to play, providing passers-by with not just a visual, but also an audio experience.

Finally, 100 lenticular six sheets have been placed at high-footfall, key city-centre locations across London, via JCDecaux and Clear Channel. Lenticulars have been chosen to demonstrate the quick shutter function of the Galaxy S4 camera using the a still image of the same a boy jumping into water that is being used at the London IMAX, with the boy appearing to move when the image is observed by passers-by.

Avikar Jolly, Head of Brand and Communications, Samsung UK & Ireland, said: “We are always searching for compelling ways to showcase the incredible innovation in our products. The Galaxy S4 has amazing photographic features which enable our customers to express themselves like never before. We have used the power of OOH to present these amazing features in the most creative way possible.”

Fiona FitzGibbon, Head of Out-of-Home at Cheil UK, added: “This use of sound and image is truly forward-thinking in terms of development and innovation in out-of-home, pushing the boundaries of what can be done. We have hand-selected sites to ensure maximum exposure in the areas where Samsung’s ABC1 audience live and work, reinforcing Samsung’s commitment to innovation and taking customer experience to the next level.”

The two-week push, which started on Monday 29 July and will run until this coming Sunday, 13 August, was planned and booked by Cheil UK in conjunction with Hive and Rapport.