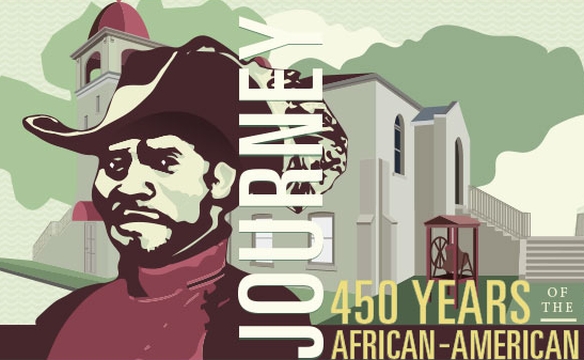 An amazing piece of American history will come to light for the first time when Black History Month arrives in February 2015. That’s when local TV stations nationwide will have the opportunity to present “The Journey – 450 Years of the African-American Experience”, a fascinating new documentary special produced by Mummycat Productions and Sam2, a division of Stephen Arnold Music.

“Journey” reveals the never-before-told true story about the role that free blacks played in the founding of St. Augustine, Florida, the oldest city in the United States. Interviews with experts and vivid imagery combine in “Journey” to explain how the first African Americans reached the new world long before the founding of Jamestown - not as slaves but as free men.

These engineers, farmers, and interpreters helped the Spanish establish St. Augustine, and establish a settlement that would later become the first destination for those using the underground railroad: Fort Mose was a garrison community made up of “free blacks” the first of its kind in the country.

What happened over the next 400 years to the people of Fort Mose, and later Lincolnville and St. Augustine, would culminate in a violent crescendo that pushed the stalled Civil Rights Bill into law.

“Journey” can be presented as a full 26-minute version, as well as in 5 two-minute segments for use by local news. Designed with multi-format flexibility, it can be played on-air, on-line, or in-school.

“We are extremely proud to present ‘The Journey – 450 Years of the African-American Experience’ as the first Sam2 production,” says Chad Cook, VP/Creative Director of Stephen Arnold Music. “This enlightening documentary perfectly embodies the promise of Sam2: provide stations with a unique resource to engage their viewers and can connect with their community in powerful new ways.”