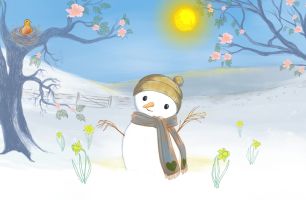 This year The Full Service, The Climate Coalition and Jelly London have all teamed up to create a Christmas tale about a Snowman, but hold on to your hearts, there’s a tragic twist...

It’s winter and our lovable snowman is having the time of his life. Until the snow stops, the sun shines and winter temperatures reach a record high. To the surprise of our main man Sammy the snowman, birds appear, flowers pop up and sadly, he starts to melt away. So if you were expecting a happy Yuletide ending you’ll be disappointed, but it’s a tale with an important message that we ALL need to hear.

The Climate Coalition Chair, Neil Thorns said: “We might not be wearing t-shirts outside in the middle of December, but we all know things are changing. The subtle signs are there, even if we can’t put our finger on what is different. It’s easy to think that climate change is something that happens somewhere else, whether melting glaciers thousands of miles away from us or maps of other parts of the world turning red. But the reality is we are seeing the signs everywhere, including here at home in the UK. We need to act to protect the things we love from climate change for future generations.”

This 60-second animation is all about bringing the message down to Earth and closer to home – to your back yard to be precise. The changes are there, you just have to look.

The film is narrated by the famous Mancunian voice of Liam Gallagher. His gravelly tones provide the perfect contrast to the fairy tale animation, created by the Jelly team.

Rankin, who founded The Full Service and creatively directed this project said: “It was and is a fantastic project. The animation was a first for all of us at The Full Service, so we were delighted to have Jelly on board who did an amazing job. Plus we were over the moon to have the iconic voice of Liam to give the piece a twist and really get it noticed. But above and beyond everything it was a privilege to make something for such an important cause. Younger generations are the ones who will have to deal with these issues, so we tried to make something that could communicate to all ages. I’m still just thrilled that The Climate Coalition were as excited about the concept as we were.”

This project is an integral part of The Climate Coalition’s Show The Love campaign to encourage people to take action and protect the things they love from climate change. This animation was designed to give it a boost this Christmas, and with people already talking about it on social media, and a number of large charities set to host it on their websites, it looks like it’s doing the job already - and more!