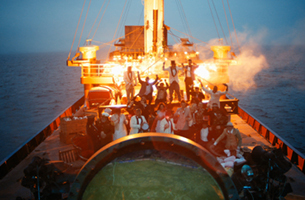 As Europe’s best football teams fight it out for on-pitch glory, Heineken® has kicked off its new UEFA Champions League campaign – “Champion the Match” - offering fans the chance to create a truly great match night for them and their friends, and ensure they don’t just watch the match – they champion it!

To mark its ninth-consecutive year of UEFA Champions League sponsorship, Heineken’s new campaign launch includes a brand new TVC. Entitled ‘The Match’, the 90 second spot shows how far one fan will go to watch the big match, and will be broadcast globally.

For match nights, additional break bumpers will run in approximately 120 markets and territories globally. These elements, along with a teaser film featuring Barcelona legend, Xavi, will give a clear call to action for the brand’s new digital activation, #ChampionTheMatch. The digital work is by DDB & Tribal Amsterdam.

Building on the success of last season’s award-winning #ShareTheSofa campaign, #ChampionTheMatch kicks off on February 17th. It sees the activity evolve from an enriched in-game twitter Q&A, to an immersive entertainment platform that taps into fans’ match day rituals. It supports fan behaviour of using social media platforms to talk about the game, but #ChampionTheMatch stretches through pre-game build up, the action itself and into the post-match debate – with highly engaging and shareable content created throughout.

The campaign will drive broader appeal of match nights, by not only having live match ‘commentary’ from nine footballing legends, but also adding a celebrity friend into the mix. Using unique combinations of unexpected guests, jaw-dropping locations from around the world and surprising Heineken twists, fans will have the tools to create a truly memorable match night experience every match week until the Final itself.

In addition to the digital campaign, on and off premise promotions will run in over 90 markets with the headline promotion giving fans the chance to win prizes every minute of every match in selected markets – including to the Final.

Hans Erik Tuijt, Global Activation Director at HEINEKEN, commented: “Our Champion The Match campaign encourages football fans worldwide to create world class experiences, whether they are watching the TV at home, or out in a bar with friends.”

“The games are social occasions that last longer than just the 90 minutes on the pitch. Fans’ match day rituals are important and we want to help them make the most of the whole experience, not just the match itself. We want to encourage fans to host the ultimate match nights – be that at home or in bars; watching the matches with friends.”

Through the highly regarded UEFA Champions League Trophy Tour, the excitement of the competition extends far beyond Europe and thanks to Heineken, more football fans will have an once-in-a-lifetime chance to experience the iconic trophy first hand.

During the tour, fans can take photos with the iconic trophy, see UEFA Champions League memorabilia and win tickets to the UEFA Champions League Final. That’s not forgetting a chance to win a trip of a lifetime to Heineken’s world-famous Ibiza Final for the last #ChampionTheMatch of the tournament. The event sees football fans from over 35 markets fly to Ibiza, where Heineken creates the ultimate match night in a way only Heineken can.