The Influencers 292 Add to collection

INFLUENCER: Day 1 at SXSW, through the eyes of Jordan Harper, Technical Director at iris 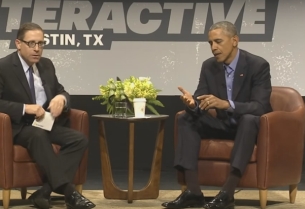 The big story on Day 1 of SXSW 2016 is clearly that Barack Obama – the first sitting president to appear at SXSW – turned up and scuppered the afternoon schedule for everyone else.

Already running over by 20 minutes, Evan Smith tried to wrap him up: "Sadly Mr President … we’re out of time."

"I’m the President, so we’re going to have one more minute."

Staged a little way from the main action and with tickets allocated by ballot, most attendees watched Obama’s pleasantly frank ninety-minute session – where he discussed civic engagement, technology’s role in democracy ("it’s easier to order pizza than to exercise your right to vote"), challenges with procuring digital services ("a system not fit for purpose") and even poked a bit of fun at his critics, giving the Thanks Obama meme some new life.

Obama aside, plenty of time on Day 1 is dedicated to planning a schedule for the next four days: making tough choices between interesting talks, working out how you’re going to cram lunch in when the only free time you have is dashing from one side of Austin to the other, before trying to balance a bit of ‘relaxing’ in the evening with the desire not to wake up the next morning feeling more than a little worse for wear.

One thing that seems evident after poring through the schedule is the feeling that 2016 is all about coming back down to earth.

SXSW 2015 gave us Martine Rothblatt’s mind-bending discussion on AI and digital immortality, Paola Antonelli exploring the curious bridges between art, design and tech and a cast of weird and wonderful hybrid innovators that had found success by exploring the boundaries and intersections of multiple disciplines.

Whether it’s the upcoming presidential election or the cumulative effect of everything from the debilitating lack of diversity in most companies, the ongoing inaction in the face of global climate change, or the seemingly unending conflict in the Middle East – SXSW 2106 looks to be a slap in the face and rallying cry to get innovators, technologists and leaders to focus on tackling present problems with the tools already at our disposal.

It’s dangerous to draw too many conclusions before things really get going, but Jerry Kaplan’s talk – jokingly titled ‘Robot Armageddon: AI, Jobs and Inequality’ – was probably the most obvious counterpoint to last year’s visions of mind clones and sentient artificial intelligence.

Kaplan argued that our biggest enemy is not the prospect of rogue software sending robot soldiers modeled on Arnold Schwarzenegger to destroy the planet, but how we tackle the inevitable change in what we consider ‘work’. How can we create a more fluid workforce that is able to adapt to more sophisticated and efficient automation, while recognising the value that true – human – intelligence adds to the world.

One way of interpreting Obama’s presence is to complain that – by inviting the ultimate figure of authority to the party – SXSW 2016 has become a tool of the establishment, but I see it more as a rallying cry from the most powerful leader in the world that we have some big, soluble problems that we can start fixing right now; if only we recognise the value of participating in solutions rather than complaining about problems.