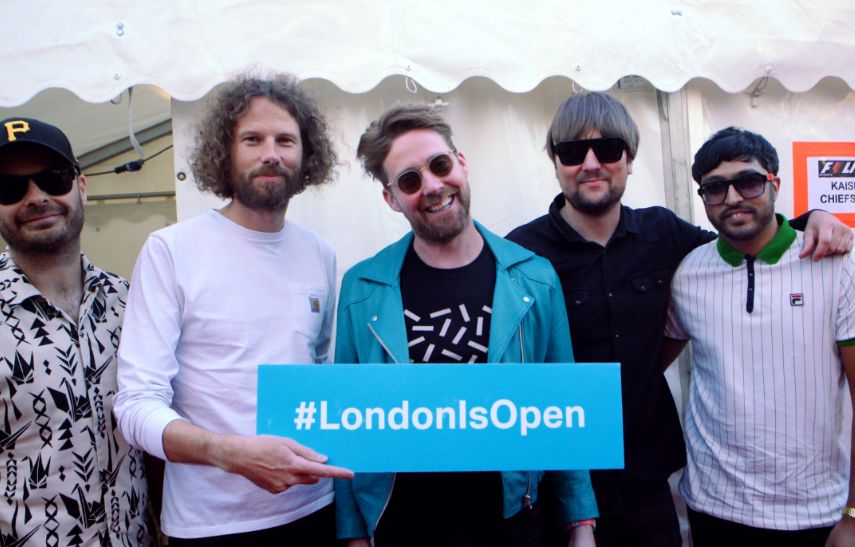 A stellar line-up of stars from the worlds of sport, music and entertainment today joined the Mayor of London’s campaign to tell the world that London is open for Summer.

As part of the #LondonisOpen campaign, a short 50 second video has been launched which features Sadiq Khan alongside a host of stars including Jimmy Fallon, Jenson Button and The Kaiser Chiefs. They are captured on camera lending their support to celebrate London as one of the world’s most international and diverse cities and discussing what they love about London during the summertime.

From summer food markets, to outdoor green spaces and some of the city’s most loved landmarks, everyone agreed that London was the best city to visit in the summer.

London has demonstrated great resilience, unity and spirit in recent months following the terrible events at Westminster, London Bridge, Finsbury Park and Grenfell Tower. The Mayor has launched the ‘London is Open for Summer’ campaign to reassure visitors to the city that the capital remains open to all with a diverse range of events and attractions for everyone to enjoy.

Both Britons and international travellers agree that the city is a great place to visit this summer. The latest research from visitlondon.com shows that one third of people in Great Britain are considering taking a tourist day trip or booking an overnight stay in London in the next six months. And the latest tourism booking analysis shows that international arrivals in London are set to be up 14 per cent on last year, from July to October. International visitors are taking advantage of the great value offered by the city, with bookings for arrivals from America up 21 per cent, and Asia Pacific, up 14 per cent, over the same period.

In addition to this London also welcomed a jump in tourism during the first quarter of 2017, with 4.5 million overseas tourists visiting the city, making it the best on record.

To coincide with the project, London & Partners, the Mayor’s official promotion agency, has launched a summer campaign on visitlondon.com/summer, which is designed to encourage visitors to discover all the great things the city has to offer during the Summer months. It features activity suggestions, accommodation ideas and helpful traveller information. It also contains several fantastic ticket offers ranging from top London attractions, to experiences, restaurants and bars.

London has experienced a record number of tourists over the past month, with thousands attending events such as Wimbledon and BST Hyde Park. Crowds of over 100,000 flocked to the capital to watch the Formula One Live showcase, that featured drivers racing some of London’s most famous streets.

With the summer now well underway, the capital will be hosting several exciting events over the coming six weeks including; the BBC Proms, the ICC Women’s Cricket World Cup Final, the IAAF World Athletics Championships, RideLondon, Notting Hill Carnival and the Royal Gifts exhibition at Buckingham Palace. Visitors can also experience some of the free exhibitions at The Natural History Museum, The Science Museum and the Design Museum.

Mayor of London, Sadiq Khan, said: “London is the greatest city on earth and there is nowhere better to spend time this summer. Every corner of the city is bursting with life and colour - whether you’re planning a visit to one of our top tourist attractions and world-class museums, enjoying one of the capital’s major sporting or cultural spectacles or simply taking a walk around our beautiful parks and green spaces. For me, the unique buzz of London in the summer shows the city at its very best. I’m saying loud and clear - London is open for business and open to everyone this summer.”

Laura Citron, CEO London & Partners, which runs visitlondon.com, said: “I'm proud that Londoners are coming together to show that #LondonIsOpen for Summer. Visitors are such an important part of what makes London a fantastic place to be, so we're looking forward to welcoming record numbers this summer. Visitlondon.com has an abundance of ideas and offers for everyone to make the most of their summer in London."

Laura Whitmore, TV presenter, said: "London in the summer is fun, hot, vivacious and I remember as a kid coming over from Dublin and I was thinking I was in this completely different world because the weather is a lot better than it is in Dublin, there are so many opportunities in London, so many fun things every where you go, in Oxford Circus, Leicester Square, you see all these really talented people busking and so much going on and that is a memory I’ll always have and then coming here and living here I’ve seen that anything is possible and London is truly open."