Behind the Work 144 Add to collection 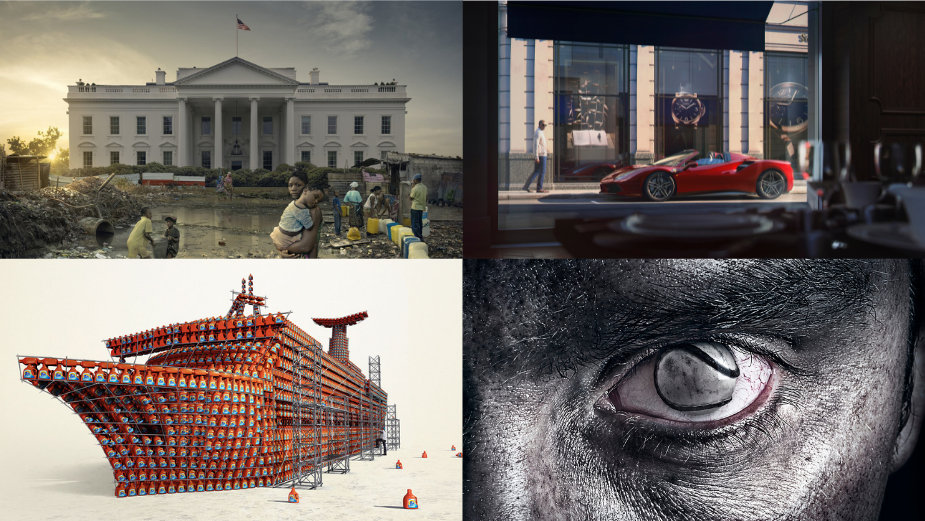 Saddington Baynes is a production studio that keeps on evolving. Launched in 1991, Chris Christodoulou - now CEO - joined the company as its first full-time employee and Retoucher in 1994, and from there, the team has grown to 38 people in-house, with a further 250+ freelance network across the UK, USA, and Germany, winning multiple awards from the likes of Cannes Lions and CLIO while working with some of the worlds biggest brands and agencies.
Many companies claim to be the first of its kind, but in 2014 with the launch of its Engagement Insights® consultancy service, Saddington Baynes proved this point to be true. Taking a neuroscience approach to creativity and advertising, the team has tapped into consumer emotions to find success with a range of projects - notably for the likes of Honda and Ferrari.
It’s been a transformative 30 years. Here, Chris alongside ECD James Digby-Jones walk us through 15 of their personal favourites, and the studio’s most innovative, boundary-pushing, and iconic projects. 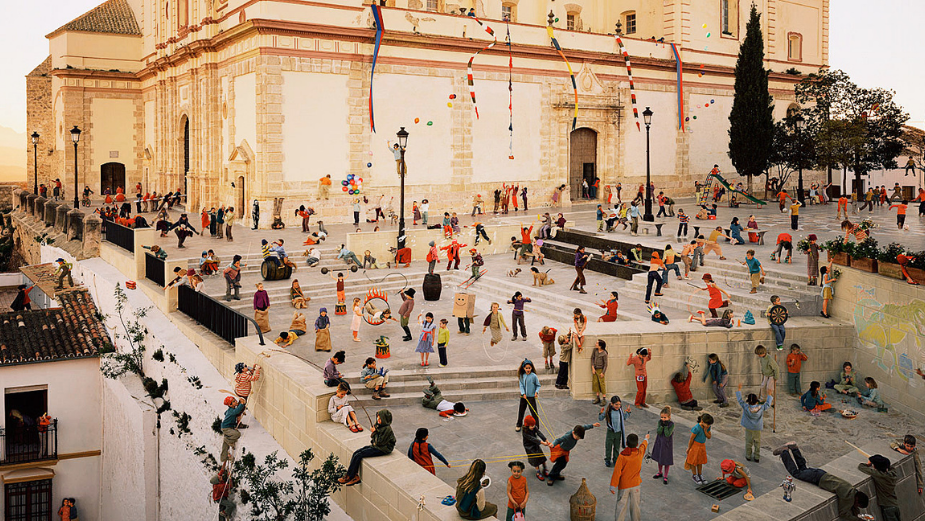 In 1998 came Saddington Baynes’ biggest ever campaign, where the team had only six days to retouch more than 100 elements. It was shot by acclaimed photographer John Offenbach in Spain, with the creative inspiration coming from a Brueghel painting. It was a technical feat: To solve the level of complexity in such a short period, Saddington Baynes colour balanced all shots - which changed in colour temperature throughout the day - to match the master background which enabled the team to brush through without layer masks. The super high-resolution final image formed the basis for Petit Bateau’s campaigns across the whole year. 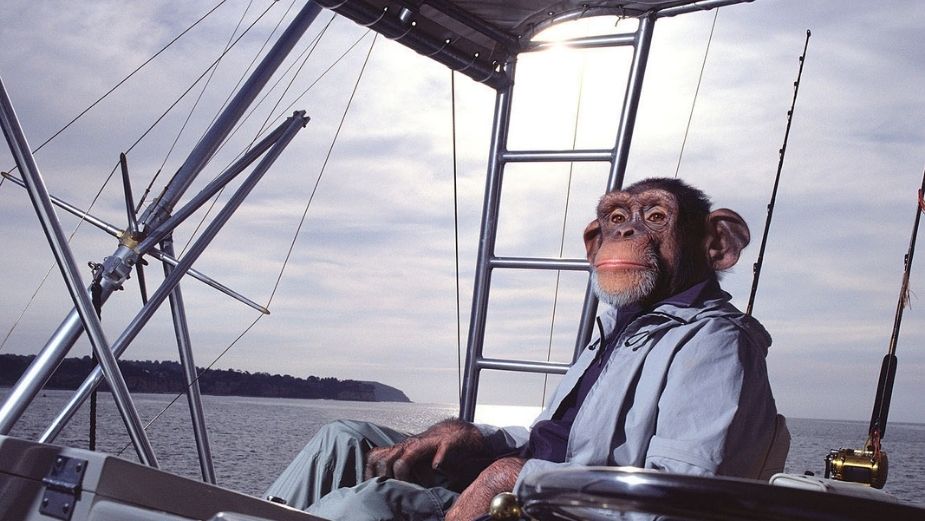 Saddington Baynes’ work with Full Circle launched the brand in the UK and helped the studio win a wood pencil at the D&AD Awards alongside collations from Press Advertising. The chimp was shot in the studio in a range of poses before landing on the iconic final image. Saddington Baynes retouched the shots with the model photography, shortening the legs and lengthening the arms to make it as accurate as possible.
Creative Director: Richard Flintham
System used: BARCO Creator
Agency: Fallon, London
Photographer: Spiros Politis 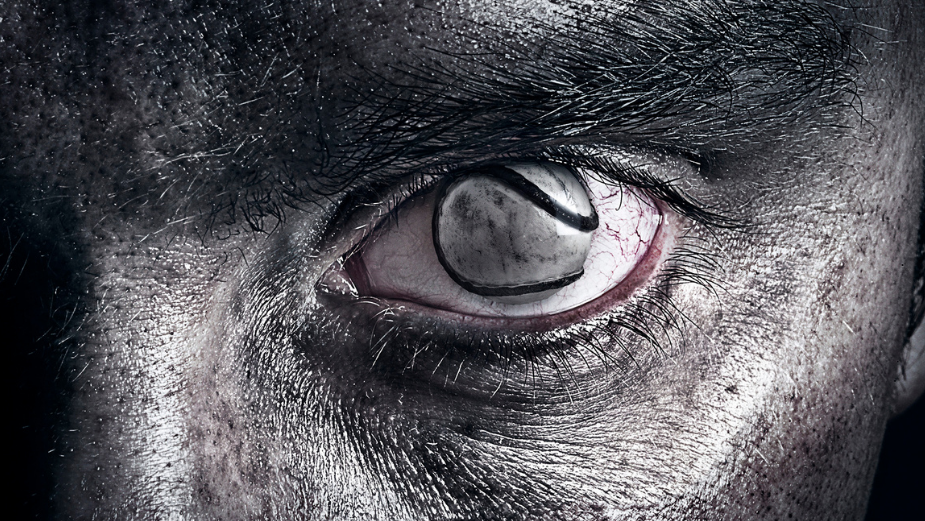 Often, turnaround times need to be short. But in this case, Saddington Baynes spent several years working on this huge campaign with Guinness Hurling for Irish International. “Replacing the pupil with a hurling ball - Sliotar in Irish - required subtle blending skills to make it believable,” James told LBB. “We wanted the sliotar to attain even more expression and intensity of glare than the original, striking a balance between a read of the detail stitching while not appearing too reptilian.” And the goal? ‘Bold impact.’ 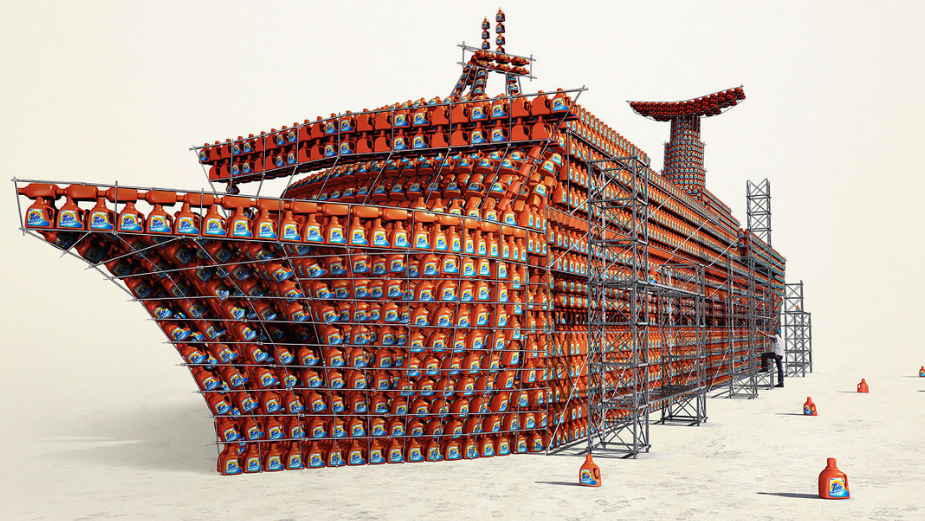 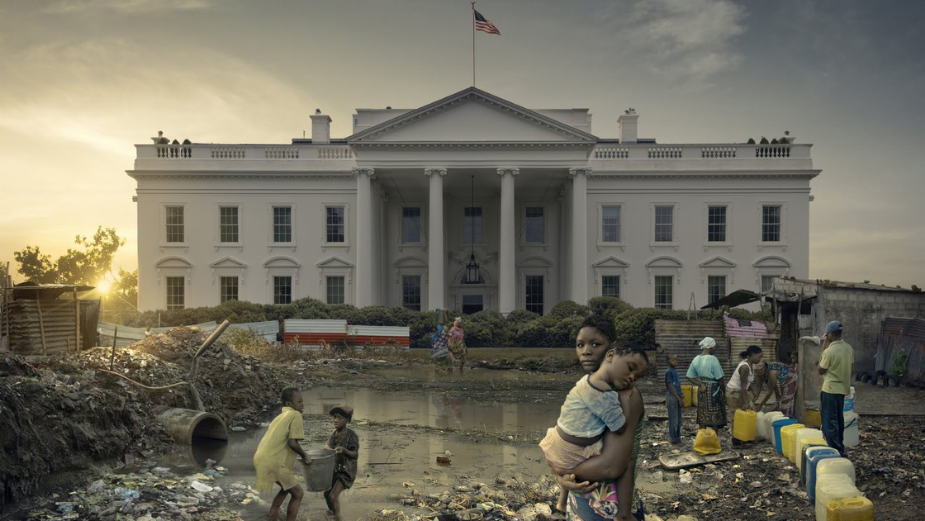 In 2010, Saddington Baynes was commissioned by WaterAid to create an image that would give a simple message about sanitation. This simple, yet hugely powerful, campaign, caused waves when it seemed to openly critique and put the onus for change back on governments. Coinciding with The Sanitation and Water for All High-Level Meeting in Washington DC, Saddington Baynes reimagined the White House’s lawn showing ‘how Washington DC could look if the city didn't enjoy sanitation and water for all - a reality faced by 2.6 billion around the world.’

Here's an example in how to pull off an omnichannel campaign; From initial concept visuals to a fully realized multi-channel campaign, Saddington Baynes created a range of assets from a TV spot, to print and digital poster sites, and bus wraps. It even included special build sites including the popular main escalator space at London's Euston and a 100ft tunnel at London’s Angel tube station. “We worked around the clock to bring the concept to life in just six weeks,” says James. “Mixing stills and live-action shoot production with virtual environments, character animation, particle simulation, and complex VFX.” This huge campaign won silver in both the Digital Billboard Campaign, and Consumer TV Campaign categories at the International Creativity Awards. 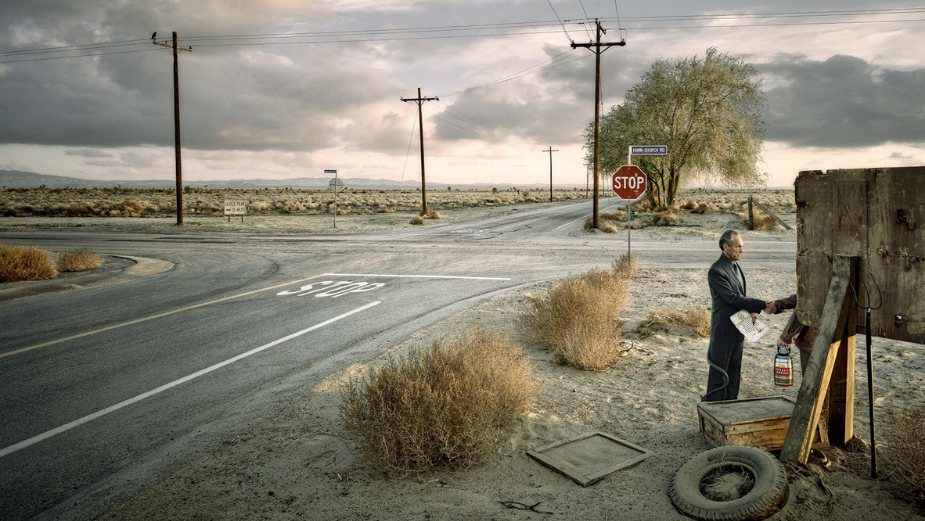 Here is an 'absolute classic' from Saddington Baynes, Lowe, and master photographer Olad Veltman for Stella Artois: “The theme of reassuringly expensive takes a demonic twist as people sign away their souls to the devil in exchange for Stella Artois,” says Chris when describing the campaign. It was shot on several 10”x8” negatives, and combined in post by Saddington Baynes’ artists with a ‘subtly beautiful but menacing colour grade,’ - here, the high level of detail and composition helped make these ads what they are: evocative, and award-winning, Silver Lion at Cannes Lions 2005. 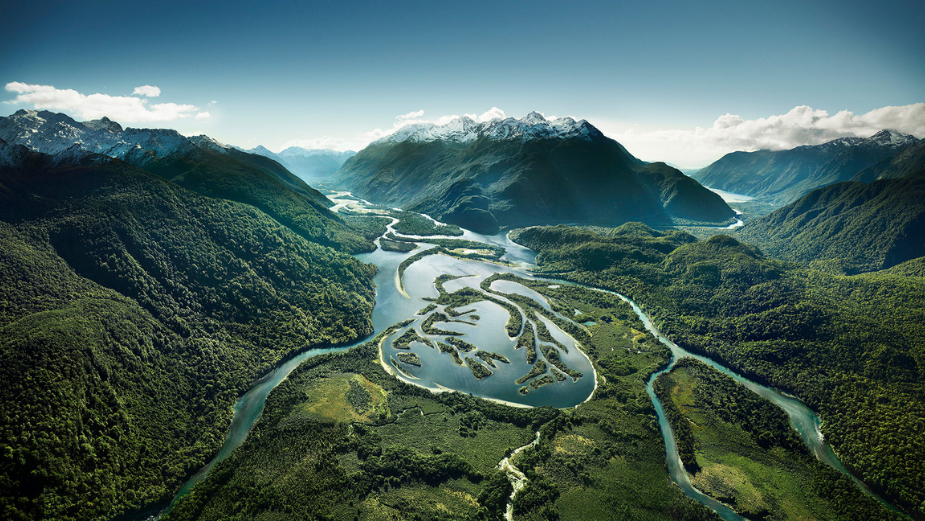 Humanity and nature: they’re heavily intertwined, and sometimes we forget it. Here, Saddington Baynes reminds us. Tasked with creating an image to highlight and promote the health benefits of Ranexa, the Angina medicine, Saddington Baynes used aerial photography to capture the New Zealand wilderness before combining the original shots to create the final image drawing attention to the heart and valves. It shows Saddington Baynes’ retouching and composition skills at their finest - with 400 hours spent painstakingly retouching - and won Bronze at the IPA Photo Awards for its Digital Enhancement category, and was awarded twice for excellence in The RX Club Awards for Landscape. 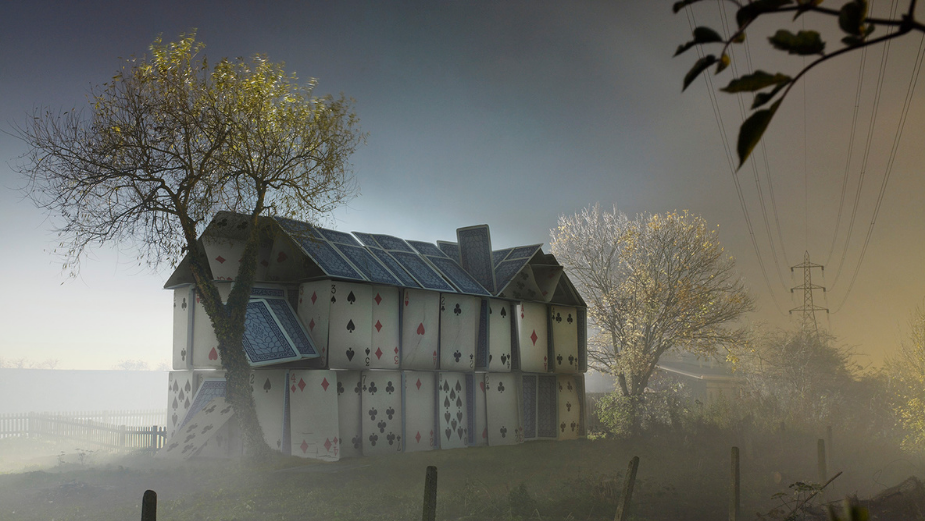 Brand mascots can be key to commercial success; Here, Saddington Baynes created Asics’ character, ‘The Asics Gellyfish’ to coincide with the launch of its Gel Quantum 360 range in the US. “Designing a hybrid of a jellyfish and an innovative sports shoe with a full 360˚ gel sole, that is not only believable but both beautiful and eye-catching, required a wide range of skills,” James tells LBB.

From laser scanning the prototype to organic sculpting and procedural simulation of the tentacle movements, Saddington Baynes created wondrous stills and animation which tapped into real jellyfish movements with bespoke illumination, particle systems, and consistent creative direction. For the team at Saddington Baynes, ‘Creating branded characters like the 'Gellyfish', is by far one of SB’s most rewarding and inspiring styles of project.’ The ‘Asics Gellyfish’ won best CGI at Le Book Connections Awards, and gold for best professional animation at the International Creativity awards.

Saddington Baynes is constantly evolving, and with evolution comes testing out new ways of producing stand-out work. For ‘Statue,’ Saddington Baynes created an ‘epic’ moment of a Muay Thai battle frozen in time. To carry it out, the team utilised full-body 3D photo scanning with the help of expert FBFX. “We focused on using advanced procedural displacement developments, complex shaders, and dynamic particle simulations to bring to life this epic animated story with unparalleled attention to detail,” says James. Showcasing what can be achieved with CGI, the project won Platinum at the International Creativity Awards for best self-promotional video and was the best CGI winner at Le Book Creativity.

Advertising is changing its approach to beauty, and rightly so. Here, Saddington Baynes highlights the incredible ways beauty brands can promote their products without playing into unrealistic beauty standards and the damaging ideologies that come hand-in-hand. We’re seeing nontraditional methods and new creative thinking help brands produce multi-channel campaigns that aren't tied to the limitations of photography.

“Our 'Redefining Beauty' showcase explores the power of CGI and FX - taking reference from iconic trailblazers including Alexander Mcqueen and Kevyn Aucoin - to look at abstraction, misconception, and complementary contrasts,” says Chris. “Using CG, we've freed ourselves from the constraints of photography, experimenting with the motion of physics, photo-realism, and abstraction to see how we can inspire awe, authenticity, and beauty.”

The breathtaking visuals showing everything from a sea of lip liners to powder explosions helped Saddington Baynes win gold at the 2020 Creativity International Design & Advertising Awards.

In 2018 Saddington Baynes created a series of films for Honda’s Real View Test Drive campaign, and thanks to their pioneering Engagement Insights consultancy service, Honda became the first auto brand to apply neuroscience techniques in production. “Using Engagement Insights we were able to decipher the best style of architecture to use in the animations that both kept in line with Honda’s brand imagery and provided an ergonomic space for our CG artists to work to tell the story in the clearest, most effective way possible,” says Chris.

Overall, Saddington Baynes created almost an hour of content for Honda with 20 digital films, overall 300 shots, and 900 outputs for four vehicles. Engagement Insights is a first-of-its-kind service and helped Saddington Baynes win best use of data and insight at the CIM Marketing Excellence Awards in 2018.

With Saddington Baynes’ previous work with Gaggenau, a precise ‘avant-garde’ aesthetic had been established and here, the team was able to use that aesthetic to stunning effect and to win highly commended at The Drum Design Awards 2020. The studio’s in-house videographer worked with the team at Maker Projects to shoot the visuals for the artist and the chef respectively, each showcasing their respective creativity. The inspiration? Still life paintings found in galleries worldwide. The VFX solution created a smooth process for the team, enabling the work to blend seamlessly at the CGI production stage. 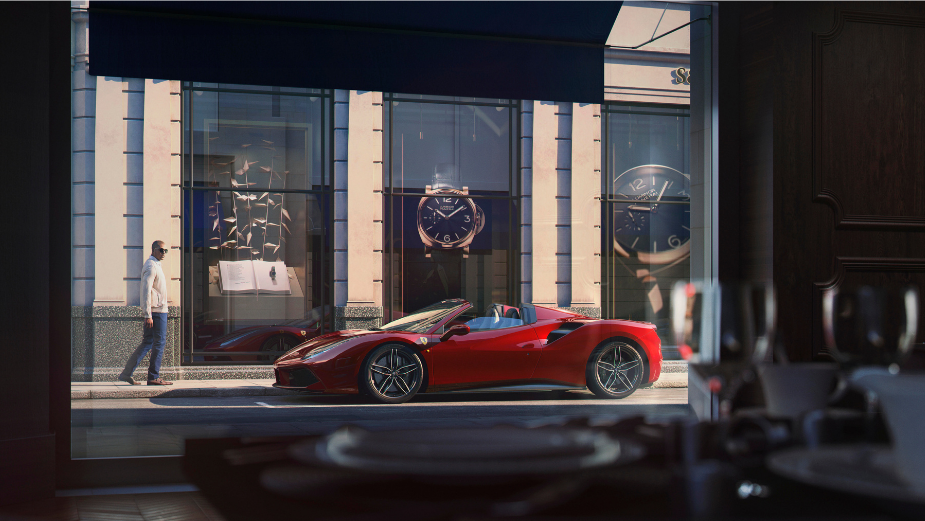 Often with the best CGI, you don’t even recognise the imagery has been used. This couldn’t be more true for much of Saddington Baynes’ work, and is especially true with its recent campaign with Ferrari for the ‘488 Spider’, where from the urban environment to the vehicle to the passerby have all been crafted in CGI. This spot won bronze in the 3D category at the Creativepool Annual Awards this year, and in many ways, this kind of stunning work is Saddington Baynes’ bread and butter: using its SBLabs to showcase the opportunities for full CGI production as an efficient, and cost-effective method. 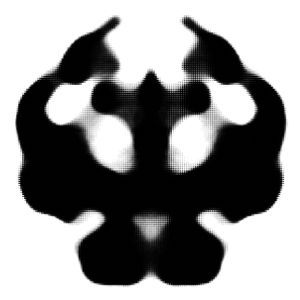 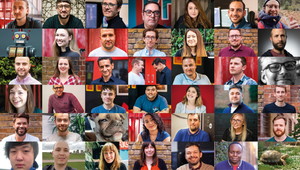 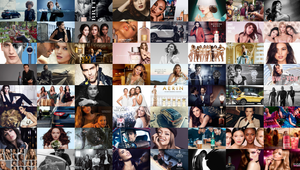 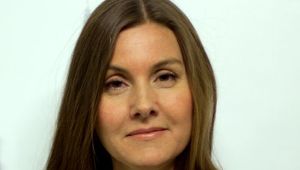 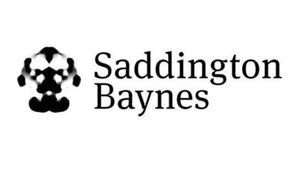 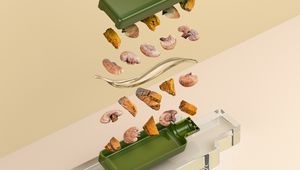 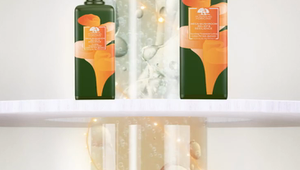 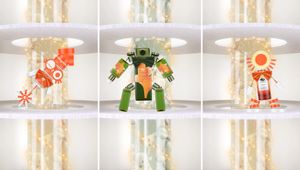