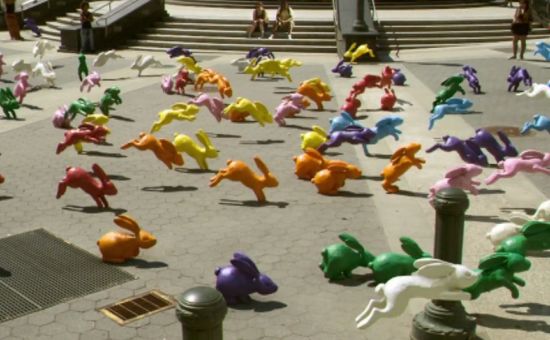 Renowned director Frank Budgen has passed away, LBB is saddened to learn. The multi award-winning filmmaker and co-founder of Gorgeous Enterprises died yesterday at the age of 61 after battling cancer for several years.

The groundbreaking director built up a reel of creative classics over his career, including the epic 2003 spot ‘Mountain’ for PlayStation 2 (which included a cast of 50 stunt people and 500 extras each day) and the joyful explosion of stop motion animation, Play-Doh, for Sony Bravia, in which he marshalled 40 animators and countless brightly coloured bunnies on the streets of New York.

His ads filtered into the public consciousness, influencing popular culture in the UK and beyond. Reebok’s ‘Escape the Sofa’, Nike ‘Tag’ and Levi’s ‘Twisted’ were all highlights of early 21st century advertising.

More recently he had created a cosmic coffee ad for Taylors of Harrogate, which showcased his attention to detail and hands-on creative style. To film the spot, he took the unorthodox approach of spending three weeks housed in his work studio in Willesden experimenting with lights, shapes, sounds and textures to craft a coffee advert that is unlike any other.

Frank Budgen began his advertising career at BBDO as a copywriter, before moving to M&C Saatchi and then BMP (Boase Massimi Pollitt), where he first tried his hand at directing. In 1992 he joined Weilands and in 1997 co-founded Gorgeous Enterprises with Chris Palmer and Paul Rothwell.

Over the course of his directing career, the industry rewarded his creative vision with numerous awards, including the Cannes Lion Grand Prix for Mountain. In 2012 D&AD named him the ‘Greatest Director’ at their 50th anniversary celebrations, an award that he shared with Tony Kaye.

Levis "Twist" from The Quarry on Vimeo.

Taylors of Harrogate 'Welcome to Coffee'