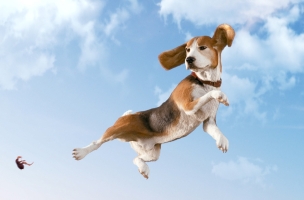 Dogs can't fight off fleas and ticks by themselves. But in Frontline Plus Fight Like a Little Green Man, the Nice Shoes Creative Studio partnered with Saatchi & Saatchi Wellness to imagine a scenario in which a dog could battle fleas as effectively as Frontline Plus formula, personified by its trademark clan of little green men. The challenge to solve was how to get a dog to behave like a ninja. Rather than attempting to train an actual dog in martial arts, Creative director Harry Dorrington proposed a scenario in which live action footage and a photoreal 3D dog were brought together, imbuing the heroic canine with the skills needed to fight off pesky parasites. Dorrington has aided Saatchi & Saatchi Wellness in crafting the Frontline Plus ninjas across multiple campaigns, so he was well positioned to impart the ways of the ninja.

Saatchi & Saatchi SVP Creative Director Carol Fiorino commented "We wanted to do something that would bring a new dimension to the campaign so we developed the Fight Like a Little Green Man story that involved having a real dog mimicking the Little Green Men ninja moves as hes being attacked by fleas and ticks. We enlisted the talent of Harry Dorrington at Nice Shoes Creative Studio to tackle this challenging CG animation sequence. Harry managed to combine live action with CG seamlessly to create totally believable and graceful choreography of a beagle doing Kung Fu moves in mid air. We love the outcome! "

For this action packed spot, Saatchi & Saatchi Wellness teamed Harry up with live-action director Warren Kushner of K Films. The team executed an approach in which the dog was filmed at a high frame rate with the Phantom 4K Flex and RED cameras and also capturing the dog with a 3D scanner. The scan was produced by Ron Bedard of Industrial Pixel LA.

"The dog was trained to perform certain moves, but there's obviously a few restrictions in trying to capture a dog roundhouse kicking a flea," said Dorrington. "The information that we captured in-camera along with the data from scanning became the basis of the more ambitious moves, which we then keyframe animated."

The Creative Studio team collaborated on new animations executing the dogs moves in Maya while also utilizing Maya fur to realistically portray the dog's coat. It was rendered in Arnold and composited in Nuke. They then animated the Frontline Plus ninjas taking out their flea enemies, which had to be rendered with anatomic precision. Finally, the spot was graded by Nice Shoes colorist Chris Ryan, who provided a natural look to the piece that helped unify the live action and visual effects.

"We had a lot of details going into how the dogs skin and eyes move in order to make him look realistic, but we also needed to bring in a bit of character into his performance while making it consistent with the live action shots. I've collaborated with Saatchi & Saatchi Wellness on quite a few of these. This project was one of the most complex, but a lot easier than teaching a dog to punch and kick," concluded Dorrington. "After all, you can't teach an old dog new tricks."