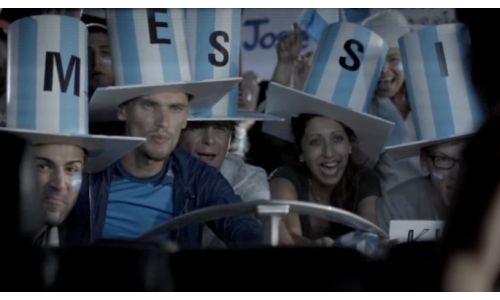 Saatchi & Saatchi Thailand announces their win of Asia’s biggest online gaming company, Garena, with the launch of the FIFA Online 3 campaign ‘I am the one’.

The campaign was released the day before Argentina’s Lionel Messi set foot on the world stage at the FIFA World Cup in Brazil, and celebrates the idea that through FIFA Online 3 anyone can ‘be the one’.

The campaign for the free-to-play multiplayer online football game was teased with the media hijacking of football news websites by replacing actual football stars mentioned in news articles with that of Thai game players, and launched through a stirring film dubbed ‘Messi’s Arrival’.

An interactive version of the film can be accessed at the website http://iamtheone.in.th where viewers can insert their own faces into the film to ‘be the one’ and also join the world’s largest football team photo.

‘I am the one’ will be strategically rolled out into Outdoor, Point-of-Sale and Social content over the next month through Saatchi & Saatchi Thailand’s unique Live Creativity real-time social and content hub, and will continue to develop as stories of the World Cup and social conversations evolve.

“When Brazil scored an own goal, our content team produced an ‘interview’ with a Thai player talking about how he just wanted to score the first goal,” explained Chaipornkaew. “When Spanish star Alonso lost tooth, so did our stars and even the audience. When Suerez hurt his knee, so did we.”