Editors' Choice: Vangardist Magazine prints 3,000 copies of its May issue with blood-infused ink 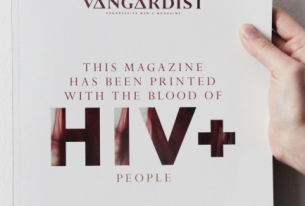 In a new campaign from Saatchi & Saatchi Switzerland for Vangardist, a leading German/English language men’s monthly, the magazine invites its readers to take a hands-on approach to ending the social stigma surrounding HIV.

To coincide with one of the biggest HIV events in the world - Life Ball - which takes place every year in Vangardist’s home town of Vienna, all 3,000 copies of its Spring issue are printed with ink infused with HIV+ blood donated by three individuals living with the HIV virus.

Whilst the magazine has been produced according to the most stringent controls and using processes developed according to guidelines established by Harvard and Innsbruck University, ensuring that the handling of a physical copy of the magazines carries no risk of infection, and is 100% safe; the debate and discussion around the magazine and the issue it highlights has already been significant.

Despite 30 years of campaigning, activism and research, HIV remains the 6th biggest cause of death in the world.  Yet for many people the virus is seen as old news, with discussion and debate relegated to just one or two days a year when key communities and organisations around the world force the issue back onto the news agenda.

With NGO’s and Governments alike all acknowledging that the social stigma surrounding the disease remains one of the key factors preventing the effective management, and ultimately the eradication of the virus, Vangardist believes it is essential that conversations around this topic are reignited.

Commenting on the attention being generated around the magazine, and the rationale behind the campaign, Julian Wiehl, Publisher and CEO of VANGARDIST said:  “The editorial team at Vangardist is committed to dealing with a wide variety of topics affecting our readers. We believe that as a lifestyle magazine it is our responsibility to address the issues shaping society today.  With 80% more confirmed cases of HIV being recorded in 2013 than 10 years previously, and an estimated 50% of HIV cases being detected late due to lack of testing caused by social stigma associated with the Virus.  This felt like a very relevant issue for us to focus on not just editorially but also from a broader communications stand point.”

Jason Romeyko, Executive Creative Director of Saatchi & Saatchi Switzerland explained:  “This is truly a “Nothing Is Impossible” story - one we have been passionate about for a long time. When Vangardist approached us to help them raise awareness of this important cause around Life Ball in Vienna, we knew we had met a brave client. With this unique project, we want to create a response in a heartbeat by transforming the media into the very root of the stigma itself - by printing every word, line, picture and page of the magazine with blood from HIV positive people. By holding the issue, readers are immediately breaking the taboo.“

The magazine is available to subscribers from today, 28th April, and will be on the newsstands and online from next week.  The Facebook page also launches today, and aims to be one of the most widely visited and “liked” HIV related pages on Facebook, demonstrating to the world a community of people for whom the HIV virus carries no social stigma exists.

This campaign aims to show that a community of people around the world willing to publicly show their support and become #HIVHEROES online, even just by talking about HIV, people can become HIV Heroes.

In addition to lending their support socially to the campaign, individuals interested in getting even more involved, will be able to participate in an online auction later in campaign when further copies of the magazine will be sold in an effort to raise further monies for HIV related causes / organisations.