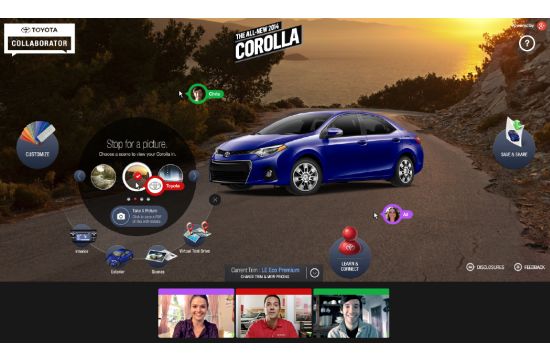 Shopping for a car online is about to get seriously social. Toyota, and its agency Saatchi & Saatchi LA, partnered with Google to create the Toyota Collaborator. While several automakers have online configurators, this is the first truly social, multi-user, collaborative configurator.

Launched on November 25, the social shopping application brings people together to configure a Toyota using the power of Google+ and Google Hangouts. While a user builds their all-new 2014 Corolla, they can invite friends in a Google Hangout to pick colors, add features – and even take a virtual test drive using Google Street View – all in real time. Another cool feature: the interior view of the car rotates horizontally based on the tracking of eye movements.

Finally, the app’s “Connect with an Expert” feature can bring a salesperson from a local Toyota dealership into a hangout – bridging the gap between online and offline shopping – and emphasizing the collaborative nature of this tool.