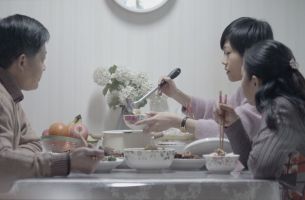 Saatchi & Saatchi Shanghai, in collaboration with Chinese director Xi Ran, has created a heartwarming campaign for Safeguard to celebrate Chinese New Year, when Chinese families traditionally get together for a reunion dinner.

The campaign ‘Wash hands and have dinner’ is comprised of 4 emotional online videos exploring family dynamics and personal stories of people's efforts to reunite for Chinese New Year. The films have been viewed in China more than 40 million times since their launch at Chinese New Year. Two stories, 'Three Guys' and 'Office Lady', are online in China now for the duration of lantern festival.

'Three Guys' shows how most parents pack too much into their child’s luggage before they go away. The film gently reminds viewers of their parents’ love and that health is the best gift you can give them in return. 'Three Guys' almost immediately broke 1 million views after its online debut, and set social media abuzz with comments. 'Office Lady', the “white collar tear jerker”, tells the story of a girl working in the city. While it seems fantastic, it is actually incredibly tiring. Her parents worry about her being in the city alone. “Wash hands and have dinner” is their subtle way of expressing their love. The other two stories of the campaign are titled 'Coming Home' and 'Reunion'.

All of the stories reflect people's different lives and what they encounter during this festive season. The tagline ‘Wash Hands before Eating’ is aimed at maintaining health through hygiene by keeping hands clean before mealtimes with Safeguard.

Commenting on the spots, Kenny Choo, Chief Creative Officer of Saatchi & Saatchi Shanghai, said: “In China, every time someone comes home for a meal, you would hear the words ‘Xi Shou Chi Fan’ which literally means ‘Wash hands and have dinner’ – and this is synonymous with all families in China. For Safeguard, the emotional connection with this Chinese vernacular has made it a household name in China for the last 25 years. This was a fantastic opportunity from P&G to create a series of emotional stories set during CNY in China."

Thinking Of Buying An Oculus Quest 2? Here’s All You Need To Know
Sir John Hegarty on the Future of Talent: “Your Own Black Book Has Become A Very Limiting Way To Find The Right Person”
“Pyramids Are Tombs for Talent”
Jessica Alba and Zac Efron Take Action in Spy Thriller Trailer for Dubai Tourism