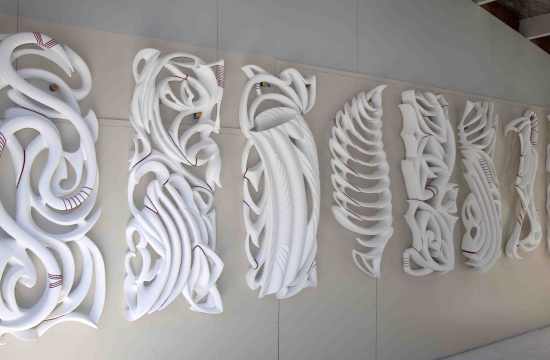 Two highlights of the autumn/ winter programme of Saatchi & Saatchi Gallery New Zealand have been announced; Celebrating 10 successful years, footwear designer Kathryn Wilson opens a major retrospective of her work on 31 October, followed by the first ever exhibition of sculptures by John Hall from 12 December.

This year, Kathryn Wilson celebrates her ten year anniversary in business. Since 2003, Kathryn has carved out a path for herself as New Zealand's premier footwear designer. The exhibition is a celebration of the people who have helped Kathryn make it this far, framed within the cultural context of the time that helped to shape Kathryn's brand. Aided by some of the country's top fashion photographers, videographers and stylists, this exhibition will incorporate multi-media touch-points through which guests can literally step into the shoes of one of New Zealand’s top female entrepreneurs and business success stories.

Kathryn Wilson commented: "We want to celebrate ten years in business - for any company, it's a big achievement. Our nature isn't to look back and dwell on past successes, but rather to raise a glass to the amazing people who have helped us along the way, and of course to look forward to another ten years of even greater success and bolder ideas.”

Rounding out the season from 12th December is an exhibition of John Hall’s work titled “Life”. Hall predominantly works with polystyrene, which he carves, coats, and then paints.  For his exhibition at Saatchi & Saatchi Gallery, he has drawn inspiration from his ancestors, the land and sea, life's emotions, as well as many years spent living in parts of Europe where he began expressing himself through art. Hall now resides in Whakatane, where he dedicates his days to his passion for creating.

John Hall said: “This is the first ever exhibition of my work, and it’s a real honour and privilege to be chosen to showcase it at the amazing Saatchi & Saatchi Gallery.  When I create, I must listen to music.  Listening to Maori or Greek music seems to take me where I need to be, and I find it influences my work - guests to the gallery will see this inspiration come through.  I love art and the journey it takes me on, and I’m looking forward to showcasing my creations.”