Screening takes place in Hamburg on 21st of September at 6pm 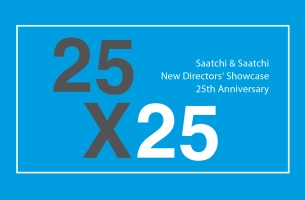 New directors, motion picture and full-video technologies: for 25 years now all of this has been united at the New Directors’ Showcase (NDS), initiated by the creative agency Saatchi & Saatchi.  When the agency introduced the NDS in 1991 for the first time at Cannes Lions International Festival of Creativity, a unique success story began. Since then countless young directors have made their debut and claimed a place in the international squad of top film-makers.

This year at the 25th anniversary in Cannes, a Showreel of he NDS Class of 2015 was preceded by 25x25: An Experiment in Film, an unprecedented film created by 25 world renowned NDS alumni, and produced by Andy Gulliman, Saatchi & Saatchi Worldwide Film & Content Director.  Saatchi & Saatchi now presents the NDS 25 year anniversary Edition to the German audience exclusively on 21st of September at 6pm, at the premises of Google Germany in Hamburg.

"We are very glad that we could gain the support of Google Germany as a cooperation partner for this event“, says Christian Rätsch, CEO Saatchi & Saatchi Germany. „This is also the proof for the increasing importance of film for digital marketing – after all videos have become the most consumed content on the web."