How much did you 'Feel the Reel' at this year's New Directors' Showcase? 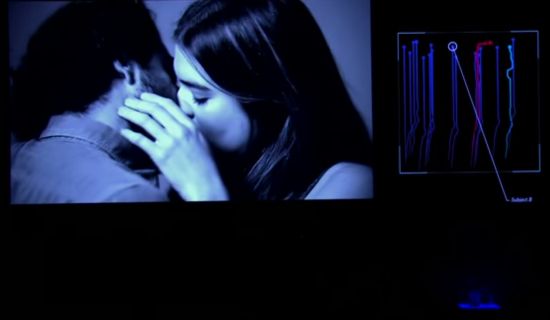 The 2014 Saatchi & Saatchi New Directors’ Showcase #feelthereel premiered at Cannes Lions Festival of Creativity on 19th June, with a live event that introduced the Showreel of 19 films by 18 New Directors.  Saatchi & Saatchi gave the audience a ‘world first’ experience: wristbands were handed out to all 2,300 audience members, and each individual wearer’s emotional response was monitored for the entire time the NDS reel was projected.

The data mined from the wristbands was then visualized and projected onto screens mounted either side of the main screen showing the reel.  Whilst the audience watched the event their emotional reaction was being simultaneously collected and projected, and the theme of ‘Feel the Reel’ - conceived by Saatchi & Saatchi creatives Linda Weitgasser & Alex Sattlecker - came alive.

The wristband, created by Studio XO for their new XOX Emotional Wearable Technology Platform, is a silicon band containing electronics that draw biometric data out of the body by listening to its ebb and flow.  The wristbands measure levels of excitement in the host and an LED light embedded in the wristband moves through a spectrum of colours, blue, green, orange, red & magenta (magenta being the highest state of arousal). The change in colour indicates that the wearer is having an ‘episode’ and a change of emotions.  Information from the individual wristbands was broadcast wirelessly to a central unit that harnessed all the data received.

Studio XO mined all the data collected from the individual wristbands in Cannes, and in their London studio created individual graphs to show how the audience responded. The graphs give interesting details and facts on the audience’s behaviour patterns and emotional reaction to the Showreel, which is illustrated in the selected graph on our Facebook page here:

An average of all audience members’ emotional reactions:

- 98% of Users were stimulated by the work they saw on the NDS reel.

-  65% of Users that turned highly aroused at some point.

Regarding general behaviour, there is a strong correlation of audience arousal, which seems to happen consistently at the same time in around a 85% of the audience. Some videos show a more differentiated effect among reactions, such as Emile Sornin’s funny ‘Grab Her’ music video for Disclosure, where part of the audience were getting very agitated and others seemed completely unaffected.  Tatia Pilieva’s erotic short ‘First Kiss’ consistently maintained a medium to high arousal level, which was shared by most of the audience.  Josh Cole’s promo for Rudimental ‘Not Giving In’ caused an excitement peak about halfway through the film.  Vania Heymann’s humourous ‘Walking Contest’ came during the down slope in excitement of the previous video, but nevertheless maintained a strong reaction, although differentiated between the individuals. Ed Morris’s hard-hitting anti-bullying ad Cybersmile #dontretaliate provoked a strong reaction throughout the audience.  Tariq Abel-Gawad’s visually stimulating ‘Box’ also got a strong initial reaction, which dipped then peaked again at the end of the video.

Films featuring sexual references and humour provoked the highest levels of arousal in the audience; for example Kyra & Constantin’s ‘Rollin’ Wild’ featuring spherical animals had a good initial reaction, with the leopard and cheetah characters causing highest level of arousal, although people experienced different levels of arousals to different animals; Alberto Belli’s titillating ‘It’s Not Porn’ sketch caused high levels of arousal that lowered throughout the film; Alvise Avati’s witty ‘Beans’ film had a strong effect on the audience, with most of the wristbands registering a increment in arousal. Donato Sansone’s risqué ‘GrotesquePhotobooth’ provoked one of the most noticeable variations in people, with around 20% of the audience getting very aroused, and others remaining calm.  But not all of the films that caused high levels of reaction in the audience’s wristbands were funny or sexy; some were just classy and well crafted, such as ‘Icons’ for The Sunday Times shot by Us.

The data collected shows that the idea, the concept and the technology were proven, and it is possible to capture a human reaction to a film and store it as data.

Little Black Book is proud media partner to the Saatchi & Saatchi New Directors' Showcase, which is set for global screenings. The next is in Moscow on 21st August.