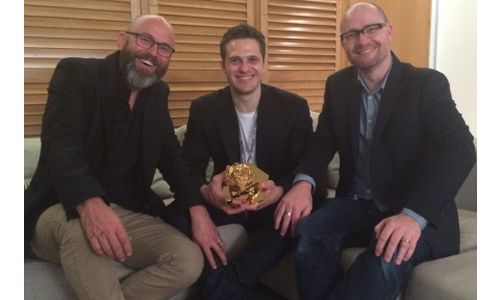 Tui Brewery has won Gold for “Catch a Million” in PR and Bronze for “Beer Plumber” in Promo and Activation at the Cannes Lions Festival.

“Catch a million” was created in partnership between client DB breweries, part of the Heineken Group, Saatchi & Saatchi New Zealand and Apollonation. Beer Plumber was created with in partnership with 8com and Porter Novelli for PR.

Creative Director Corey Chalmers says: "We're stoked to get global recognition for this most Kiwi of brands. We're even more thrilled to stand together with our client, Will, on stage to cap off an extraordinary year with Tui. Right, off to celebrate."

Creative Director Guy Roberts says: “It’s brilliant to see such an iconic New Zealand brand creating award-winning work. Both are simple ideas that resonate with kiwis and have not only picked up creative accolades but also, importantly, delivered real business results for an awesome brand.”

William Papesch, Marketing Manager, Tui said: “To have both ‘Plumber’ and ‘Catch a Million’ recognised on the biggest global stage is incredible. We also, really need to thank New Zealand cricket fans, as the ‘Catch a Million’ campaign literally wouldn’t have existed without them.”