NDS alumni launch '25x25: An Experiment in Film' for the 25th anniversary of the showcase 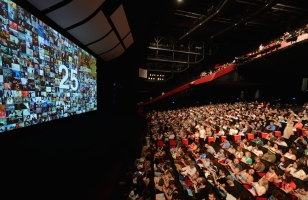 At the Palais des Festivals in Cannes on Thursday 25 June, Saatchi & Saatchi celebrated 25 years of the New Directors’ Showcase by breaking with the recent tradition of technologically groundbreaking live shows, and going back to the grassroots of the NDS to celebrate the unrivalled directing talent that made it all possible.

In previous years the NDS has opened with an inspiring theatrical piece.  This year, the 25th year, Saatchi & Saatchi will rely on the names and rich archive that sits within the NDS, and call upon their alumni to engage in an experiment in film, that allows focus to rest solely on the screen.  It is highly appropriate that the screen is the hero.  And the screen inspires and gives a magical introduction to the reel for 2015.  To make this happen, Saatchi & Saatchi invited 25 directors to answer the brief.

Each director was given a brief: to create a 60 second film, end their film with a prop from their original Showcase film, and start their film with the preceding director’s prop.  The unique result is ‘25x25: An Experiment in Film’.

Pablo Del Campo, Worldwide Creative Director of Saatchi & Saatchi commented: “The film 25x25 is a celebration to thank the amazing directors who have made the New Directors’ Showcase possible.  It is testament to the enduring influence of the Showcase on both commercial and experimental film.  The legacy started with Paul Arden and Bob Isherwood.  We thought that this year everything should be on screen.  If you have a strong heritage you have to celebrate it.”

Following the premier of 25x25, the NDS Class of 2015 was revealed (check out the full reel at the bottom of this page) with a showreel of 14 young directors currently making waves in the film industry.

The screening was sponsored by Corbis, a leading digital content and worldwide entertainment rights company founded by Bill Gates.

Andy Gulliman, Producer of 25x25 and Saatchi & Saatchi’s Worldwide Director of Film and Content commented:  “The New Directors’ Showcase has mapped the cultural and commercial zeitgeist in each of its 25 years, and how it has shifted according to the tastes and technologies of the times. The willingness of each of the 25 directors to contribute to this experiment in film for the New Directors Showcase underscores the value of promoting emerging creative talent.”

For interviews with the NDS 2015 directors and more NDS coverage, click here.