Saatchi NDS: How This Directing Duo Captured a Beautiful Digital Dance Using the Xbox One Kinect

Awards and Events 720 Add to collection

Maria Takeuchi & Frederico Phillips on being featured in the New Directors' Showcase, computerised dancing and more 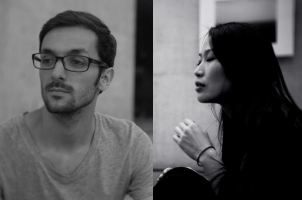 There's something eerily beautiful about Maria Takeuchi & Frederico Phillips' as·phyx·i·a. The low, ambient music and otherworldly nature of its protagonist make for intriguing viewing, but it's perhaps the new-world, technological way in which the duo created the film that landed them a spot on this year's New Directors' Showcase. They captured it using the Xbox One Kinect motion capture device. LBB's Addison Capper caught up with Maria and Frederico to find out more

LBB> You used Xbox One Kinect technology to capture motion data for the film. Can you tell us exactly how that works? What kind of setup did you have?

Maria Takeuchi & Frederico Phillips > Kinect Xbox One is a sensor that is sold by Microsoft for the purpose of gesture based gaming but the capabilities of its latest sensor to capture at a higher resolution then its predecessor caught our attention so we decided to test both versions against each-other, in doing this we found out the the new sensor was not only much more detailed but if we combined two sensors to capture both back and front we could then merge them together in a 3D application. Brekel, a software by Jasper Brekelmans was our tool of choice to capture the point cloud data, once that part was taken care of then we could manipulate this data in any way we wanted to.

LBB> And once you’ve captured what you needed, how is that then rendered/transferred to screen? (Apologies if that’s a basic question, the tech is bamboozling me slightly!)

MT & FP> After merging both back and front point cloud data in a 3D application, the data was cleaned up and ready to be simulated with particles. Then it was transferred into Houdini, a VFX software to create the look of dots and lines in this case and subsequently textured and lit.

LBB> What inspired you to make a film using the technology?

MT & FP>  There was a need to do something exploratory and experimental that satisfied our own curiosity and helped us answer some 'what ifs' and ideas we had previously contemplated. By allowing the physical back into the digital we had hoped the result would translate itself into a piece that people could relate to, so even though it was computer generated, it carried human emotion.

Technically speaking, we get really excited with opportunities that are made possible today with technology being widely available to mainstream and how that hardware can be used in ways they were not originally meant to. We can finally execute ideas that before were only possible with a high budget (a motion capture studio in this case). The solutions are not perfect but as the resolution/accuracy increases things are looking promising for these inexpensive sensors.

LBB> And what inspired the film’s title? Why did you decide to link it to suffocation?

MT & FP>  as·phyx·i·a is meant to be an eloquent choreography that stresses the desire to be expressive without bounds and to represent the need for liberation.

Originally the title of our soundtrack "as·phyx·i·a", which can be described as a momentary death in other words, it came from the idea that there is a need for freedom in a time interval in which there's a temporary suspension within this digital space, conveying the ardent wish to extricate herself from the deadly situation.

LBB> The body’s movements that we see in the film - what themes were you aiming to explore and how do they link up with the film’s title of ‘asphyxia’?

MT & FP>  The visual representation of the character was tied in with both the name of the project and to the choreography as it looked to convey the feeling of entrapment. This project was very much about expression, whether that was through exploring new ways to do things visually or finding ways to combine our strengths in music, dance and visual art. The idea developed itself somewhat naturally as we had hoped for, we experimented a lot and really tried to manipulate the data and mood as we went.

LBB> There’s a real sense of creative technology to it. Is that something that you enjoy exploring in a broader sense?

MT & FP>  Technology is undeniably a strong part of art nowadays, it opens up new ways for artists to express themselves and these are great times to be an artist with the ability to cross over into different fields. We both love traditional arts combined with new technology that's definitely a way we will enjoy exploring for future projects. Mixing and combining both can many times lead to interesting experiments, at the moment that are so many creative opportunities to bridge fields. Our next project would have to aim for that as well.

LBB> Tell us a bit about the production… How long were you shooting for and how big was the crew? Anything else we should know about?

MT & FP>  The shoot took about 5 hours to capture the movement of the performance and filming.

MT & FP>  It took us about 5/6 weeks to complete and the longest part was actually waiting for the rendered sequences (over 5000 frames) as we only had 5 computers rendering the whole project. There were many challenges as most of the tasks were new to us, such as finding suitable ways to combine and clean the data captured using our workflow, producing a sound track that could help drive the visuals and coming up with a look that connected with the original concept or selecting approximately 3 minutes of performance from the original 30 minutes we captured. So much good data was captured because Shiho Tanaka's movements were very suitable for this type of project.