Awards and Events 525 Add to collection 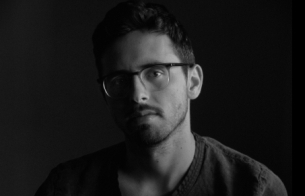 While Flying Lotus is known for some of the most forward-thinking music of recent times, he has also been a part of some pretty fantastic promos.

And so when a job comes in to shoot his latest music video, it’s understandable to feel equal parts excitement and pressure. A long-time fan of Flying Lotus’ videos, that’s exactly what director Young Replicant, who is repped by Pulse Films, was feeling when the opportunity to direct ‘Coronus, The Terminator’ came up. The film’s end result is a beautiful, psychedelic story of a man on his deathbed, drifting in and out of consciousness and haunted by three dancing men of the afterlife (one of whom is played by Flying Lotus, in a rare video appearance). LBB’s Addison Capper spoke with Young Replicant to find out what inspired it.

LBB> Flying Lotus is no newbie to amazing promos. How did it feel when the opportunity to work on this came in?

YR> Flying Lotus videos are some of my favorite of all time, so there was definitely a lot to try and live up to. The pressure was intense but so was the thrill of collaborating with someone with such a rich musical and visual history.

LBB> The film follows a man nearing death as he flicks between consciousness and outer body experiences. Obviously, death isn’t something anyone can experience before actual death. So how do you go about creating these moments of unconsciousness in the film? Where did you draw inspiration from and what was your starting point?

YR> The ideas came out of the textures in the music, the album art, and a couple of different cultural interpretations of death that I felt aligned with the world Steve [Ellison, Flying Lotus] had created with ‘You're Dead!’ I wanted to create an afterlife mythology that was syncretic, ambiguous and connected to the psychedelic experience. It's the kind of story that's meant to be felt in the unconscious, where multiple interpretations are possible.

Everything is filtered through the emotional lens of the main character, played by Chris Obi, as he desperately tries to make sense of his last few moments. It's like when your brain starts finding patterns and images in the black behind your eyelids right before you fall asleep.

LBB> Flying Lotus actually appears in the video, something he doesn’t often do. Whose idea was that? Why was it fitting for him to be one of the men in white?

YR> It's the first Flying Lotus track where his vocals are one of the main features, so he was adamant about being in the video. Originally there were only two characters in white so I wrote Steve a part as their ringleader. It reminded me a bit of María Casares and her two hellions in Cocteau's Orpheus, which was another subconscious inspiration. Steve's character has a sinister edge, but he also brings a playful touch to the performance which I think captures the spirit of his music really well.

LBB> And tell us about those men in white… what do they signify?

YR> I liked the idea of an afterlife purgatory populated by brokers, debt collectors, and karmic bounty hunters. They're scavengers living off what slips through the cracks of consensual reality, occupying in-between urban spaces. I modeled their look after Japanese Butoh dancers, a tradition that can be loosely interpreted as movement between the world of the living and the dead.

LBB> Flying Lotus is an undeniably creative guy - across various mediums. How involved was he in the film’s creation?

YR> I'm indebted to Steve for trusting me with what was a very important song and video for him. I had complete freedom when writing the treatment and during production, but it was from the song itself that I drew the most inspiration. Every detail and choice was a response to the universe Steve created, so I feel like he was a constant collaborator in the process. It was also his idea to incorporate a stronger dance element, which I thought really brought the characters to life.

YR> It was about two months from writing the treatment to the color grade. We shot for two and a half days in West Adams, Atwater Village and South LA. We were constantly pushing the envelope in terms of what we could achieve with a limited budget and schedule, which is really a testament to my producing partner Jordan Harkins, who tackled it with an unorthodox, ‘never-say-die’ approach. We had gracious support from Pulse Films and the passion of the cast and crew kept our necks above water.

Flying Lotus is a really rare and special artist and I think everyone involved recognized that early on. I've never gotten such a strong, emotional response to a project before, and that initial energy helped set the bar really high. Everyone fought maniacally to keep it as close to the original vision as possible.

YR> It was a production with a lot of moving parts and elements – one of the trickiest being the bionic arm for Coronus, played by young Brian Heard. I didn't want it to just be a clunky power glove that fit over his hand, which was the easiest way to approach it. After a bit of trial and error, we got in touch with an architect and designer named Christopher Day, who was able to draft a digital model of the arm and have it 3D printed as ultra thin plates. Our production designer Alec Constable polished it off and Chris Watson-Wood at Ruffian Post made it truly bionic.

YR> I'm prepping a video in the UK at the moment that I'm pretty excited about. It's a period piece, which I haven't done yet. But it’s also a chance for me to shoot in a place where the sky has some interesting, moody things happening in it. Very rare in LA.  A purely narrative project is in the works as well.