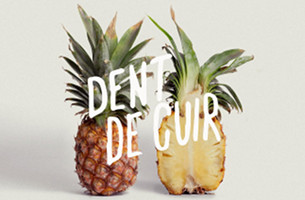 Back in 2011 director Jérémie Périn took the internet by storm with his gory sex cartoon-come pretty awesome music promo for DyE’s ‘Fantasy’. So when directing collective Dent De Cuir landed the gig of following it up with DyE’s latest track ‘She’s Bad’, they felt a bit of pressure. But they needn’t have because they totally nailed it. She’s Bad follows a suitably bad girl as she courts a guy in a bar before taking him home and doing, well, bad things to his genitals. All of this hilariously plays out as silhouettes of different wild animals replace the pair’s bodily features, each one fitting with what’s happening in the respective scene. The promo was featured on this year’s Saatchi & Saatchi New Directors’ Showcase in Cannes, so LBB’s Addison Capper chatted with Dent de Cuir to find out more.

LBB> What inspired the collage idea for She’s Bad?

DDC> We wanted to talk about what makes civilized humans connect with their inner primitive wild side. We put together these two opposed things using collage imagery technique. Caming from graphic design, dada movement and John Stezaker’s work have always been a strong inspiration for us.

LBB> All of the body replacement footage is of totally natural things. Why is that?

DDC> We spend a lot of time on internet and there is not a single day that goes by without seeing a picture of a cat or an owl or whatever cute animal. We thought it would be interesting to work with different animal imagery that was more realistic and violent.

Early on in the writing process we came to the conclusion that animals are both a strong and flexible subject to create interesting analogies. From comparing paradise birds’ nuptial parades and our seduction rituals to playing with universal adages such as the suggestion that good sex should be bestial, there is a lot of similarities between human and animal instincts.

LBB> Did you develop the concept and narrative and then seek out stock footage for the collages? How tricky were they to input in post?

DDC> All of the footage comes from one of the most beautiful nature documentaries ever, BBC’s Planet Earth. We wrote the script knowing exactly which documentary we were able to use. We did a pre-shoot with actors and our DOP to go over each shot and to validate the timings and compositions we were aiming to achieve. The post team did an amazing job making the footage plates work together.

LBB> Tell us a bit about the lady in the film – just why and how is she so bad? Who plays her?

DDC> Society often says that men are predators. Men are often presented as angry violent animals like bears or wolves and girls are like cats or a gazelle. We liked the idea of creating a universe where roles are switched and where we could play with the double meaning of the word ‘bad’, in both mean and predatory ways. Thanks to Aude Auffret who played the character.

LBB> Dye’s previous video is a bit of a YouTube legend. (Jérémie Périn conjured up a properly NSFW work gory sex cartoon for ‘Fantasy’ that’s racked up nearly 50 million views.) How was it following up that? Did it affect your thought processes when developing She’s Bad at all?

DDC> Jérémie Périn did an iconic video. It’s always a big challenge to work for an artist who has previous successful films, but we had a fair dose of fun tackling the challenge. From the beginning of the process, we thought it was relevant to continue in the surrealist, weird tone set by Fantasy. So we built She’s Bad as another kind of episode of a gore sex music video series with our artistic input. We think we modestly brought our contribution to it – hopefully in Dye’s next music video someone else will try and raise the game another level.

DDC> Writing a fresh and coherent narrative story with existing footage and with a low budget and limited resources was the trickiest. Photoshop mock-ups made out of film stills were a saviour when it came to testing what was working and what wasn’t.

It was also important to make this project viable for the post team, especially when it came to inputting the documentary footage pieces in an efficient way. To achieve this, we and our assistant director put a lot of energy in organising the shoot wisely.

DDC> We just delivered a project for The Shoes. We developed a set of live visuals for their upcoming European tour, it was a happy blend of design, animation, scenography and UI. That one was a lot of fun and good vibes. Also, we recently signed with the Caviar family, who we’re now working with on UK and US representation, as well as the French markets. We are super enthusiastic about that new collaboration.

Despite the fact that our sketchbooks are full of ideas ready to be developed, at the moment we’re trying to take our time, do things right and select the right projects.  That’s going to help show what we can bring to the digital and interactive table.