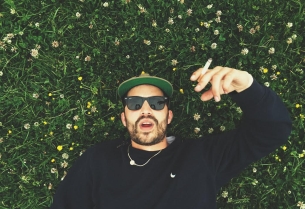 Charlie Robins’ promo for Klangkarussell's ‘Netzwerk (Falls Like Rain)’ will turn your legs to jelly. The young British director enlisted Ukrainian daredevil Mustang Wanted to free-climb his way around Belgrade, Serbia. And while bits of it are downright terrifying (just wait until he transcends a crane with a GoPro strapped to his head), the whole thing is properly stunning. And so it’s fitting that it earned Robins a spot on this year’s Saatchi & Saatchi New Directors’ Showcase. LBB’s Addison Capper chatted with him to talk daring drone-work, phobias of heights and sweaty palms.

LBB> What inspired you to make a film about free-climbing? Why was Netzwerk the perfect fit for the idea?

Charlie Robins> I wanted to make a video that turned people giddy. I'd seen a load of free-climbing videos on Youtube and they all made my palms sweat. I thought this would make a unique music video that people would share around the world, something that sticks with you after watching it. Netzwerk came through to me and I knew it would be a perfect fit. Lyrically its about looking to the sky which works for obvious reasons but there was also a sense of scale and space to the track which added another level to the video.

LBB> You worked with Ukrainian daredevil Mustang Wanted - how did you get him involved? What’s he like off of camera?

CR> I had been keeping an eye on mustang wanted for a while on YouTube. His videos are absolutely terrifying and i just knew i had to make something with him. I watched a documentary the featured him a while back and the next day i sent him an email asking if he would be interested in making a music video should the right project turn up. After various emails in broken English he said yes. Off camera he was a really sweet, quiet guy. He doesn't speak a word of English so he brought his friend with him to translate. He listens to classical music, eats well, doesn't drink, smoke or do drugs and occasionally gets involved in lower league Ukrainian football riots. He was utterly focused when he moved, not a thread of fear in him. There was something emotionless about the way he operated which helps when you are risking your life for the sake of a terrifying rush.

LBB> How did you capture the higher shots? For example, the leg-wobblingly frightening scene atop the crane… Did you use a drone? If so, that thing is flying close to Mustang!

CR> We had a drone with a pilot called Dragon. Some of those shots were filmed hovering half a meter from Mustangs face while he stood on top of the tallest building in Belgrade, a moment that will stick with me for a good while i'm sure. One gust of wind and that would have been that. i had to pretend i was watching Youtube.

For the cranes shots mustang and his friend climbed armed with Gopros and canon 5Ds. Due to the illegal nature of what he does we couldn't be up there with him, thank god!

LBB> Did you give Mustang much direction or did he more just do his thing?

CR> My only direction to Mustang was to do his thing but to do it safely. He would get on set and immediately look up. We would turn around for 5 mins and he'd be scaling the walls or hanging off 200ft drops. If anything trying to contain his compulsion to climb was the hardest thing to deal with.

LBB> I need to ask… how are you with heights?

CR> Shit. I discovered this halfway up a shoddy ladder. Mustang laughed at me.

LBB> You shot in Belgrade - there’s something beautiful about the city’s industrious look. Why was it the perfect location?

CR> It was important that I had a graphic and harsh look to the locations. The Eastern Block is the most amazing place if you are after a cold, concrete world. We initially wanted to shoot in Ukraine but the whole Crimea thing had literally just kicked off and getting into there was a no go. Belgrade was a great fit. The buildings looked brutal and imposing and incredible from the sky. I want to go back there, so many beautiful and unique locations.

CR> The general feeling of fear among the crew. We shot for 2 days and I don't think there was a real moment of relaxed calm. Every time we turned over was literally a matter of life and death. Mustang just had to lose concentration once. We all became great at pretending it wasn't happening.

CR> I'm off to Tahiti at the end of June to shoot a very special music video with some incredible free-divers. Its a very exciting project and one that has been some time in the making. Beyond that i'm trying to gently break into commercials and and of course travel more. I'm desperate to get out to Mongolia.

LBB> You were featured on the NDS this year and got to collaborate with a heap of well-regarded directors. How’s the experience been for you?

CR> This has been both a massive honour and nerve wracking experience. It is something I'm extremely proud of. I'm still waiting for someone to tell me its all a big joke. The NDS is a huge deal so to be asked to take part is amazing! Its nice to be recognised for some the of hard work we have been putting in over the last year. Being a director you need thick skin but nods of approval like this make it all worth while.