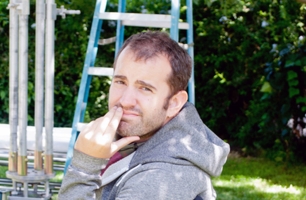 New Directors' Showcase inductee Eric Kissack directed 'The Gunfighter', a rootin' tootin' Wild Western featuring a disembodied voice (played by Nick Offerman) narrating the actions and thoughts of a very confused town. It's hilarious, brilliantly crafted and the cast's performance are all worth marvelling at.

Little Black Book's Addison Capper chatted with Eric to find out how he pulled it off.

LBB> The Gunfighter cast is fantastic - what was the casting process like? What kind of people were you looking for and how did you go about coaxing these performances out of them?

Eric Kissack> Casting was tricky because I wanted everyone to be a gifted comedic actor but I also wanted them to look like they belonged in a classic Western movie. I always knew that the key to the film working was having everything and everyone feels as authentic as possible. It couldn't feel like an SNL skit.

I knew from the start that I wanted Scott Boehner (the older Henderson brother), Eileen O'Connell (Sally) and Jordan Black (Sam the Bartender) in the film... all actors that I'd worked with previously and that I loved. For the rest of the roles, we did a traditional casting with our two amazing casting directors, Susan Deming and Dorien Davies. We were worried we wouldn't have a lot of options but it turns out that a LOT of actors are excited to be in a Western. It's like a novelty for them. So even though we paid everyone peanuts (not literally) we still ended up with a ton of amazing options.

On set, again, authenticity was key. I didn't want anyone to act "funny" or reach for the joke. Obviously, a lot of what happens is absurd but I wanted the actors to react to those absurd things in a believable way. On that level, everyone came through for me in such a satisfying way.

LBB> Nick Offerman narrates - how did you get him involved and how was he to work with? Was he always part of the plan?

EK> I've been a huge fan of Nick's for years but I didn't think of him immediately for the role... although it seemed obvious in retrospect. What happened is that I was re-watching the first couple of episodes of Deadwood to get some visual references and I suddenly realized that I was staring at a very angry, very dirty and very naked Nick Offerman in the second episode of Deadwood. As soon as I finished burying the image deep, deep down into some hidden recess of my brain, I set about trying to get in touch with him.

It turns out that we have a couple of mutual connections so I managed to get an email to him and he said yes. He was a delight to work with. We recorded his role in 90 minutes and he ad-libbed some great jokes including the one about the "back porch of his brother's wife" which kills me. I will forever be in his debt.

LBB> I love his role as the narrator, yet everyone can hear him. Where did that idea come from?

EK> Kevin Tenglin (the writer) was actually trying to write a real Western but something wasn't clicking and he just started messing around and having the narrator keep interrupting and being a jerk. He had so much fun with it that he realized there was something brilliant there.

LBB> How involved were you in the overall concept creation and writing?

EK> Again, the concept was all Kevin's. Together, he and I hammered on the script for a few weeks to come up with new jokes and to streamline the thing as much as possible. I contributed a couple things but it was mostly his baby.

LBB> Why is comedic filmmaking something that you enjoy exploring?

EK: Comedic filmmaking is not something that I enjoy exploring. Comedic filmmaking is a goddamn nightmare. You write something you think is hilarious one day and it seems like crap the day after. You have a great joke on the page and it just falls flat on set. You have another joke that cracks up the entire  crew on set and somehow when it's in the cut, the magic is gone. There's yet another joke that absolutely kills in the cut but it introduces a plot point or a character beat that people find confusing. And then, after all of that pain and struggle, you'll inevitably get a bunch of people (usually critics) saying that "it's just not funny". Yeah, comedic filmmaking is the worst. But it's what I know. It's what I do... at least until I get the call about Jurassic Park 6.

EK> It all came together pretty quickly. I remember sitting down with Kevin (the writer) at the beginning of August 2014 and saying, ok, we'll hammer on the script this month. We'll cast in September and prep the production in October. And that's what ended up happening. We shot over a weekend at the end of October. The edit was the slowest part of the process but that's just because I ended up screening it a lot and being really brutal with it... trimming and cutting until there weren't any dead spots left. You have to kill your babies in comedy.

EK> Location, location, location! We scouted just about every Western set in and around Los Angeles and the Melody Ranch in Santa Clarita was far and away the best. It was also dramatically over our budget. So we begged and pleaded and begged some more and eventually they just felt bad for how pathetic we were acting. But it was real touch and go for awhile there.

Aside from that, the hardest thing was shooting it all in two days. There's a lot of dialog to get through and we really just had to speed through it. I wish I had been able to get a few more takes and a few more setups but it was all fine in the end.

EK> I'm co-writing a feature with Kevin Tenglin (who wrote the Gunfighter) that I'm hugely excited about. It's a buddy comedy involving a ninja assassin. We're almost done with it, actually.

Aside from that, I've begun working with a production company called Hélo and doing some fun comedy spots. Commercials are turning out to be a great way to hone the craft. My heart will always be in the movies, though. Stay tuned!