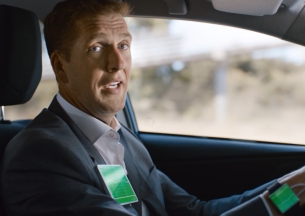 Toyota Motor Europe (TME) and Saatchi & Saatchi London have launched a pan European campaign for the new Toyota Auris Hybrid that tells the truth, the whole truth and nothing but the truth.

Shot in Lisbon, the ads feature American actor and comedian Regan Burns, best known for his starring role in Disney Channel’s ‘Dog with a Blog’, hooked up to a lie detector and challenged to talk about the experience of driving the new Toyota Auris.

Burns escapes being zapped by the detector for his claims about the Hybrid experience – that it’s fun to drive, and makes him a happier person. When, for example, he claims that it makes him a better lover though, the detector kicks in and shocks him.

The online film, which will launch on TME’s YouTube channel later today, also includes “outtakes” from the shoot, in which Burns falls asleep at the wheel, admits that he is not actually driving the car, and reveals that he’s naked from the waist down.

Launching first in France, Spain, The Netherlands, Hungary, Czech Republic, Slovakia and Italy, the 3 TVCs will run in the UK mid-August.

Andy Jex, ECD at Saatchi & Saatchi, said: “Using an all-American spokesman with perfect teeth to tell you why you need the new Auris Hybrid may sound like we’re going back in time to the deceitful days of Don Draper, but no, throw in a lie detector and this is the most honest thing we’ve made all year. Really.”

Dario Giustini, Senior Manager Brand & Communications at Toyota Motor Europe, said: "Why shouldn't we simply use a lie detector to demonstrate what real hybrid owners tell us…. that driving a Toyota Hybrid makes you fall in love with driving again."