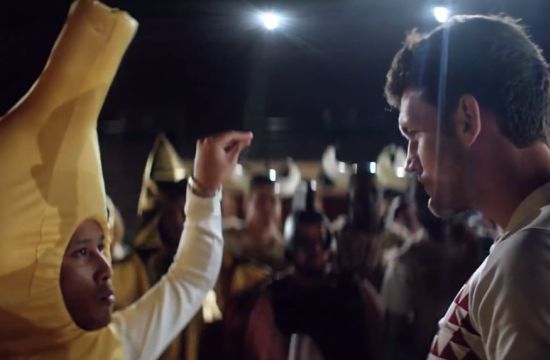 HSBC is launching a campaign, created by Saatchi & Saatchi London, celebrating its sponsorship of the 2014 Cathay Pacific/HSBC Hong Kong Sevens, the jewel in the crown of the HSBC Sevens World Series.

On March 10, a 95”film will break on youtube.com/hsbc and a 30”cut-down will air on TV globally. A 60”version of the film will be played in the Hong Kong Stadium from 28th to 30th March with a 30”running in the tournaments that follow for the HSBC Sevens World Series.

2014 is also the first time that social media has been central to a Hong Kong Sevens campaign. The social activity around #BRINGYOURGAME runs as thread through all of the campaign’s activity.

The fully integrated campaign centres on Sevens as an ‘unleashed’ form of rugby. A faster, more expressive format on the pitch, and equally expressive off the pitch, where the carnival atmosphere sees the majority of fans wear elaborate fancy dress. #BRINGYOURGAME is an invitation to players and fans to join in.

The film pits elite teams from the Series – including the likes of Dan Norton from England, DJ Forbes from New Zealand and Carlin Isles from the USA – against tribes of fans dressed in outlandish costumes. An epic hip-hop style ‘battle’ ensues, with each set of protagonists showing off their respective skills.

The ad reflects the insight that whether you’re on the pitch or in the stands, Sevens is all about one-upmanship in performance.  As a result, HSBC are inviting, and challenging, staff and key audiences to #BRINGYOURGAME throughout the tournament. For example, through competitions on Twitter where the most flamboyantly dressed fans have the opportunity to win tickets for entry to the stadium.

The campaign also features digital display, pre-roll, bus TV, OOH and press in Hong Kong before and during the tournament.  Media planning and buying is through Mindshare with Fast Track also extending the campaign idea into the HSBC Sevens Village outside the stadium and other experiential activity.

The film was directed by Bob Harlow at Somesuch & Co.

Kate Stanners, Creative Partner at Saatchi & Saatchi, commented “Hong Kong 7's is an event that is very dear to HSBC's heart. We wanted to capture the true spirit of the Hong Kong 7's.”

Andrea Newman, Global Head of Advertising & Marketing Communications, HSBC commented: “We love the simplicity and the impact of #BRINGYOURGAME. It is a fun and inherently social campaign that has the ability to invite people in, internally and externally.”

CLIENT (include name and job title):

Twitter activity around #BRINGYOURGAME and digital display, pre-roll, bus TV, OOH and press in Hong Kong before and during the tournament.