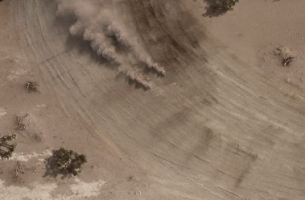 To introduce the new Toyota Tacoma at the 2015 Detroit Auto Show, the automaker and longtime agency partner Saatchi & Saatchi called upon creative studio Carbon VFX to help lead the charge for the visually dynamic “Invisible Truck.” Headed by Co-Director/Creative Director Chris Noellert, the gorgeous and unique 30 second spot pushes the boundaries of automobile advertising content with a smart and highly conceptual approach.

Saatchi & Saatchi challenged Carbon to create an invisible car, but instead of gravitating toward the simple solution utilizing heavy visual effects, the team decided to approach the problem from a different angle. Noellert opted to focus on visual environmental cues that suggested the presence of the vehicle, so the audience would mentally connect the dots and see the car in their mind’s eye.

Moving from concept to reality proved challenging as it rained the days leading up to the shoot, making the ground soggy and not ideal for the type of footage the crew needed. Undeterred, the nimble and resourceful Carbon team quickly pivoted, “We compensated by leaning hard on both practical and visual effects,” explains Noellert, “augmenting the landing with dust elements and topping off the shot with a few layers of debris splattering the lens.” To make the imagery even more realistic, the team also utilized CAD data of the Tacoma and simulated its movement at different speeds and slopes to get a sense of how dirt and debris would move in the real world.

The shoot took place over three days, followed by three intense weeks of post-production. To create all the realistic airborne dust particles and sand explosions, the Carbon team utilized Maya and Houdini for CG and Flame and Flare for all compositing. Frequent collaborator Josh Bodnar of Whitehouse Post edited the piece.

“The agency was wonderful in not just seeing us as a resource, but also as a collaborator and an integral part of the creative process — really tapping into the collective VFX experience our team brought to the table,” notes Executive Producer Marlo Baird Kinsey. “It was a fantastic experience and we hope to have many more collaborations with the lovely folks at Saatchi.”