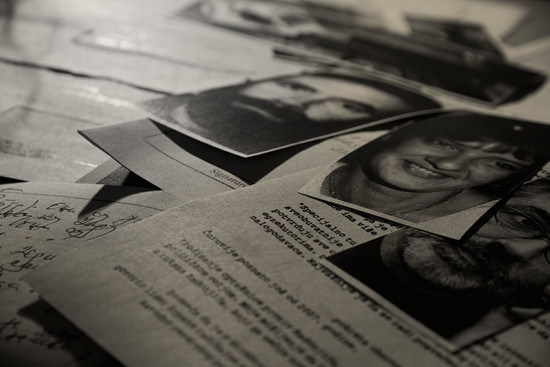 With the fatal shooting last week of German Associated Press photographer Anja Niedringhaus in Afghanistan (the 3rd attack on journalists in the country in less than a month), the shooting of Swedish-British radio reporter Nils Horner in Kabul last month, and the death of revered war correspondent Marie Colvin in Syria in 2012, fatalities of journalists and photographers continue to make headlines the world over. These journalists died doing their job, and it isn’t only press on the frontline in war zones that are at daily risk, but also investigation journalists reporting political misdemeanors of rogue regimes.

Therefore, it is timely that a campaign from Saatchi & Saatchi Belgrade for Serbian Commission for the Investigation of Murders of Journalists and Office of the OSCE’s Representative on Freedom of the Media has been in the headlines in Serbia. The OSCE (Organization for Security and Co-operation in Europe) and Commission collaborated with Saatchi & Saatchi on an unprecedented project titled ‘Chronicles of Threats’, which was launched in December 2013 as an open invitation to media outlets and journalists to document real and threatened acts of violence towards editorial staff, writers and photographers.

The OSCE and Commission for the Investigation of Murders of Journalists were set up to protect those working in the media against physical or virtual threats. In the past 20 years in Serbia, 3 journalists have been murdered, and dozens threatened. Linked to a UN initiative aimed at battling violence against journalists, a website was launched that provided information on unsolved murder cases involving journalists Dada Vujasinovic, Milan Pantic and Slavko Curuvija. Even after the Democratic revolution in Serbia, the freedom of press was in danger. In general the populace of Serbia were unaware of threats faced by journalists daily, not only in Serbia, but all over the world.

The aim of ‘Chronicles of Threats’ was to demonstrate to the general public how journalists feel when threatened. For the campaign, one threat out of 100’s of authentic threats documented against journalists was selected, and made public by inserting an anonymous letter into 70,000 copies of the most popular Serbian daily newspaper Blic. At the same time, a video message was posted on news websites tied to investigative journalism threats. The threats inserted in newspapers and posted on the internet, were designed to put the readers in the position of journalists who receive threats day to day.

The fake threat quickly spread amongst the population, and was featured on the news. When the stunt was revealed on news channels, it opened up a big debate in Serbia about the sorts of threats journalists receive daily. Consequently, unsolved cases of murdered journalists that had been forgotten about for years were revisited, and became the hot topic on news channels. Resolving these cases became a pressing issue for the new government, and it was confirmed that the State had organised the assassinations of the journalists.

Fifteen years after the murder of Slavko Curuvija, the most influential independent journalist reporting during the Milosevic regime, his assassins were arrested. Investigations into the murders of Radislava Dada and Milan Pantic were also reopened. ‘Chronicles of Threats’ has been instrumental in solving a 20 year-old case involving the then 30-year old journalist Radoslava Dada Vujasinovic, who died in 1994.

Dada, as she was known, filed war reports for Duga newspaper, and her investigative reporting into the corrupt politics of Milosevic’s regime in Serbia in the early 90’s resulted in her receiving death threats. Dada was found dead with shot wounds in her apartment on 8th April 1994, with the Milosevic government claiming it was a suicide. It wasn’t until 20 years later that, after the OSCE’s ‘Chronicles of Threats’ campaign ignited a debate in the media about threats to journalists, and the unsolved cases from the 90s were revisited, that the present- day government admitted the State had organised the assassinations of the journalists.

The Chronicles of Threats campaign had a dramatic impact through opening up the investigations into the deaths of the 3 journalists: the former Chief of the National Security (DB) Belgrade office, Milan Radonjić, was charged with having ordered Ćuruvija's murder and Ratko Romić (the head of the office's 6th section), and Miroslav Kurak (a member of a special security service within DB) is believed to have executed the crime. After the arrest, Radonjic and Romić were remanded in custody. Kurak is outside of Serbia and an international warrant for his arrest will be issued.

Saatchi & Saatchi Belgrade’s Executive Creative Director Veljko Golubovic commented: “I think the “Chronicles of Threats” campaign is a great example of true power of modern communications. Even one simple idea can move mountains and push the whole society forward. What was impossible yesterday is today’s reality. Our idea was initiation of the chain reaction that led to solving a murder case. And more than that it changed the way people feel and think about journalists.”

Let’s hope that the debate provoked by this unique campaign continues a dialogue in Serbia, and the rest of the world, about journalists putting themselves at risk daily, by reporting on injustices in societies, whether related to politics, war or other unrest.