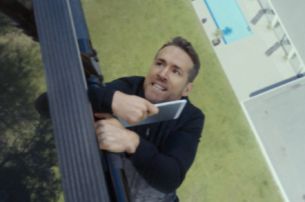 BT’s latest “Behind the Scenes” advertising campaign will build on the success of the recent up-to 52Mbps ad starring Hollywood action and comedy star Ryan Reynolds. The new campaign airs on Monday 4th July and will once again feature the Deadpool star. This time Ryan will be demonstrating the power of the new BT Smart Hub in a humorous way. The “Behind the Scenes” campaign is a parody of the advertising process and gives viewers an entertaining insight into the world of advertising.

In this new ad, viewers will see Ryan introduce the new BT Smart Hub and talk about the UK’s most powerful wi-fi signal in his typical charming manner before he casually walks to his garden and goes to great lengths to demonstrate the power of the new Smart Hub’s wi-fi signal using a helicopter.

“Watch me dangle from a helicopter in the next ad for BT’s new Smart Hub,” says Ryan Reynolds.

Dan Ramsay, BT Consumer marketing director, says: “Ryan has proved a real hit with the viewers in our recent campaign and we are delighted he will be gracing screens once again to introduce our new BT Smart Hub. The production of this ad was quite challenging for the team as they had to have two helicopters on the set. One of the helicopters had to be flown in to the location at West Sussex which was again not easy given the great British weather. It was suspended by a crane while they got Ryan to dangle from it. He was a great sport and came up with some brilliant creative suggestions during the shoot. We are very pleased with the end result and hope viewers enjoy watching it as much as we enjoyed making it.”

The television campaign will be supported by a strong 360 campaign including OOH, radio and social media which focus on the lead claim. Ryan has done some great radio executions being his usual charming self.