Behind the Work 224 Add to collection 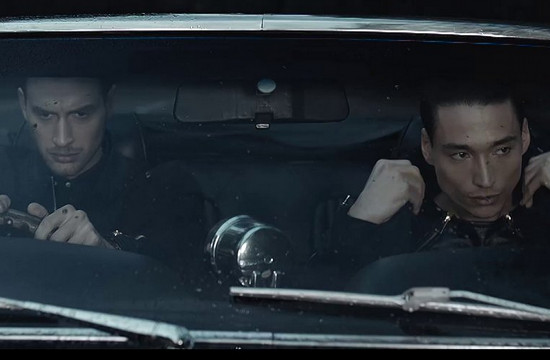 White Lodge’s Ryan Hopkinson recently teamed up with breakthrough designers Baartmans & Siegel to create an atmospheric fashion film exploring their capsule collection for River Island's Design Forum. LBB caught up with Ryan shortly after to find out more about this abstract journey and why working with WIFE and Wake The Town has caused a few pleasant problems for the future.

LBB> Could you give us a bit of background on the project and your vision behind the film?

RH> The concept of the film was based around this idea of dropping in mid-way through a journey without knowing how the story started or ended. The concept of escape was something that I was drawn to when devising the path of these two characters. I also had to consider how the key pieces would influence the film and reinforce the masculinity of collection as that is essentially the core reason of the film. So I created these abstract 'memories' that the camera pulls back through revealing him enveloped within monolithic structures as the driver races towards the unknown.

LBB> There are some beautiful suspended shots during the car scenes. How were these achievable?

RH> The technical camera moves were achieved with an incredible crew of grips and gaffers, a 30ft techno crane and a rotating stabilised head to make the camera appear as if it was constantly floating around the car. I had watched a lot of references of cars when working out the camera’s movements with Borja Lopez Diaz [DOP] and everything appeared to be short edits with locked off shots. With this and the tones of the music in mind, I wanted the camera to appear as if it just dropped in mid-way through a journey, coming across this abstract story of two characters in the car. It acts as a witness to their journey as it moves around the vehicle before it floats away at the end of the film.

LBB> How did the collaboration with music composer WIFE come to fruition?

RH> I really enjoyed WIFE’s first EP ‘Stoic’, especially the ‘Bodies’ single. And from the start of the concept I always had it in mind when I was considering the movements of the camera and the tone of the film. The multiple layering of instruments that slowly build up was exactly what I was looking for within this film. Both me and John Connon [Wake The Town Music Supervisor] believed that WIFE would be a perfect match for the aesthetics and mood of the piece, and it was an honour to work with him.

LBB> What role did Wake The Town play in the process?

RH> This was my first experience of working with the team at Wake The Town. Working with John Connon felt more like a collaboration and he made it a very smooth and easy progression. John brought a lot of experience and understanding to the project and knew exactly what tone I was looking to achieve. Knowing I now have access to such an incredible group of artists and producers makes it really hard to choose who I will work with in the future!

LBB> What can we expect to see from you next?

RH> The next projects to drop will be a photography and TVC campaign for an exciting new menswear fragrance which will be airing in America and Europe this September. This will be followed by an identity reboot of three new TVC’s for Heineken in the Middle East.