Ruud van Nistelrooy Returns for Play Like a Legend

Player steps out of retirement to join Xbox campaign via Jam 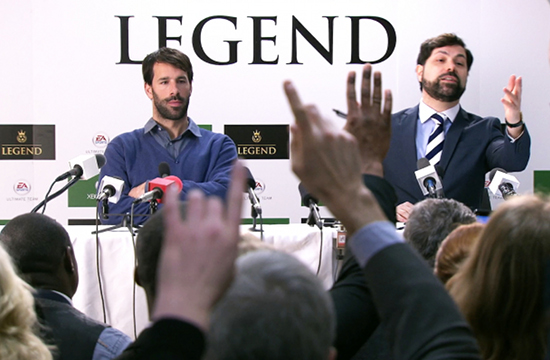 Ruud van Nistelrooy dusts off his boots to join Xbox and EA SPORTS for the launch of Play Like a Legend – a promotional campaign for Xbox – across the UK, France, Germany and Spain.

Play Like a Legend is a campaign to highlight the exclusive “legendary players” available only to those playing FIFA 14 on Xbox. The campaign stars footballing legend, Ruud van Nistelrooy, who steps out of retirement and returns to the world of football to promote his status as one of the exclusive legendary players available on Xbox.  Starting with a mock “press conference”, Ruud will star in a weekly series of short films hosted on the www.playlikealegend.com campaign hub.

Ruud’s announcement that he’s “returning to the game” has already caused a stir with international press interest and wild speculation that he is actually returning to football.

Play Like a Legend is weekly competition to determine the top FIFA 14 player in each of the target markets. Each week, a new challenge is issued on www.playlikealegend.com, as well as short videos explaining the specific challenge and tips on how to complete it. Entrants must then submit their own video content on www.playlikealegend.com, where other players will vote on the top submissions. The winners will take home a range of prizes – from millions of FIFA Ultimate Team (FUT) coins, to Legends items and Xbox One consoles.

And, at the end of the competition, the top winner in each market will get to sign Ruud to their FUT team!

“This is our first large campaign for Xbox since winning the account last year, and we couldn’t be more excited,” said Wayne Deakin, executive creative director at Jam and Engine. “Play Like a Legend is the future of integrated storytelling – the campaign puts fans and communities right into the core of the story.”